Home Relationships Love & Sex He wants Sex All the Time, I want it Never! 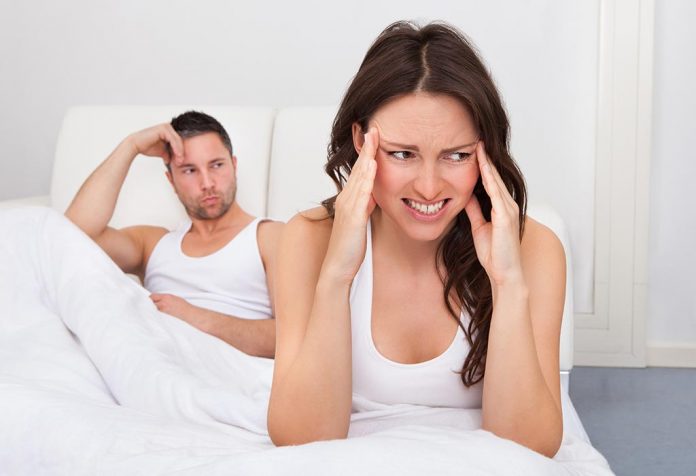 If it were up to him, you would probably never step out of the bedroom! After saying no to him umpteen number of times, you start wondering if there is actually something wrong with you! Low sex drive in women is a common issue and can be tackled too.

Are you the one who keeps sending subtle and not-so-subtle signs to your partner that more than say “you’re not in the mood”? Tired of putting down your partner’s request and thwarting his romantic advances? If you feel that your partner wants sex more than you ever do, chances are you have what is called a loss of sex drive. Whats more! Now you look suspiciously at everything he does for you, because you think the niceness is to get some bedroom action! Rather than finding your husband’s behaviour abnormal, it’s time you dig out reasons for low sex drive in women and put things into perspective.

Lack of Sexual Desire in Women – What Can Be Done?

You totally appreciate all the efforts your guy has been putting in to spice things up. But after a few years of marriage, the initial buzz has died down for you. Now you’ve other things on your mind apart from his hot body to think about, besides sex don’t interest you anymore. While this is a common issue, it isn’t a normal thing. Sex is the most intimate way for partners to connect. Maybe you should think of all the love you feel for him and let it show between the sheets. Work out together, watch movies, and look for ways to connect with your partner again.

We know that it sounds mechanical, but sometimes fixing a time for sex actually works! So even if it means setting an alarm on your respective phones for a nook night – DO IT! Having a mutually acceptable “schedule” can help take the constant pressure of having sex off you, besides helping you unwind! This way your guy will know exactly what time of the month or week he’d get lucky, saving you a mountain of awkward pressure. You can simply enjoy his romantic gestures without worrying about the ulterior motives he’d have up his sleeves when the poor thing was being denied his favourite activity!

Explaining why women lose interest in sex is quite simple. For the most part women, after a point, feel that by having sex they’re fulfilling some kind of marital duty in the bedroom. It sounds boring already, doesn’t it? Good enjoyable sex builds intimacy. Don’t think of sex as something you HAVE to do, but as something you WANT to do! Your body needs it; your love deserves it. Get up and make the first move! Sometimes there can be nothing more thrilling than knowing that you’re the one in control. Experiment without inhibitions and indulge in wild foreplay to get your hearts racing.

When your partner sees that his wife has no sex drive, chances are that your man will question his prowess in bed and mull over it. He might even in some warped way blame himself for the lull in your libido. Stop this thinking and get him off the hook. Explain to him that while you’re absolutely crazy about him, your body functions differently than his. Help him figure out the causes of low sex drive in women. You never know, working out issues could lead to steamy sessions later!

Face it, for men (and women) sex is a very big part of their relationship. It makes them feel needed and special. Granted, you could be experiencing a loss of sex drive swamped with all your responsibilities as a wife and mother. But it’s time to take matters in your own hands! Think of things that can help you get in the mood. Don’t limit sex to the usual definition. Get creative in thinking up ways to give your lover a sensational experience.

While low libido in women is a common occurrence, you shouldn’t resort to that excuse for your disinterest in sex. Remind yourself what you love the best in your partner, give each other a lingering kiss when you wake up, talk honestly about sex and make efforts to surprise him. After all, sex does make a relationship happy and there is no chance you shouldn’t indulge in some loving, no matter how tiny.

My Baby is My Lifeline