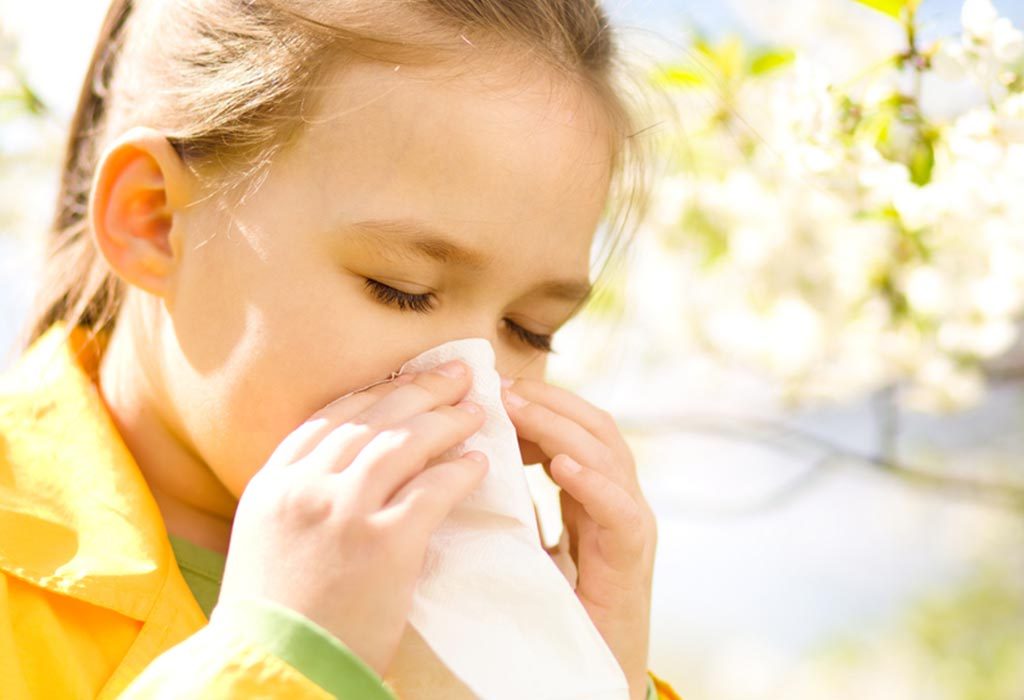 Hay fever is an allergic reaction that usually occurs due to pollen. It is very common in children but may affect them in varying degrees, which means that some children may be troubled by it now and then, while for others, it may affect their daily activities. Hay fever, also called allergic rhinitis, is a seasonal allergy. Usually, the symptoms of hay fever include itchy eyes, frequent sneezing, and a runny nose.

What Are Seasonal Allergies?

Seasonal allergies, as the name suggests, are allergic symptoms that one may experience during a certain time of the year. Most seasonal allergies are commonly called ‘hay fever’ but the name is misleading, the symptoms do not need to include fever, and it is most certainly not caused due to hay.

Seasonal allergies are caused due to airborne particles usually released by plants, like pollen or mould. While these are not harmful on their own, they can result in an allergic reaction in the child to a varying degree. Hay fever usually develops as a result of the genetic makeup and the interaction of the child with the surroundings. When these particles enter the body, the immune systems detect them as dangerous foreign particles and releases histamine. This causes inflammation in the nose and the airways, and the other symptoms that are seen in this condition.

Are Seasonal Allergies a Serious Problem?

Hay fever in itself is not a serious problem, but it can take a toll on the affected child both psychologically and physically. Children affected with hay fever cannot do any daily activity with ease, as the symptoms reduce their concentration and also make them feel tired throughout the day. The runny nose and nasal blockages do not let them sleep well at night. If these allergies are left untreated, they can have a lasting effect on the child. Sinusitis, asthma and chronic ear infections may occur in the affected child.

What Causes Allergic Rhinitis in Children?

Hay fever is caused as a result of foreign particles entering the body through the nasal passage, which triggers a reaction from the immune system. These particles may be released into the air by plants, or might even be dust. These particles are usually called triggers, and a few of them include:

The particles may be released into the air during a particular season, thus making the child get sick during specific times of the year. However, if you observe that he is sick all throughout the year, then the cause might be dust mites, animals or mould/spores, all of these are present perennially.

At What Age Your Child May Develop Seasonal Allergies?

In most cases, allergic rhinitis does not affect children below the age of three, this is only because children rarely spend time outside before that age. Hay fever might start rearing its head in older children who spend a lot of time outside. If the situation affects the child, he will have the tendency to be allergic to pollen for his entire lifetime. However, the degree to which he is affected can change, and it can reduce or increase depending upon the conditions and times. There is no specific age and specific situation in which a person can get hay fever.

Does Weather Play Any Role in Hay Fever?

Weather does play a huge role in determining if your child gets affected by hay fever, as it directly influences how much pollen hangs around in the air. Parents find that the symptoms do not occur much when the weather is rainy or cloudy. This is because there are fewer particles in the air, and consequently, fewer foreign particles in the body of the child. On dry windy days, the amount of pollen in the air increases too. If the winter was cold and wet and there occurs an early heat wave right after, plants might start producing more pollen too, this increases the chances of your child being affected by hay fever. When the amount of pollen in the air increases to great levels, even those unaffected children might start sneezing. This is mainly due to the irritating effects that pollen has on the body, and not because of hay fever.

Signs and Symptoms of Allergic Rhinitis in Kids

There are a few hay fever in child symptoms that can be readily seen and are hard to miss in particular. Some of these symptoms are:

These symptoms may not all occur in children, but they may develop into some other diseases like conjunctivitis or asthma. Children may also exhibit shortness of breath and wheezing. There are other signs too such as lack of sleep or drowsiness. He might also be doing considerably well in an air-conditioned environment, as they are mostly pollen-free. Hay fever rash in toddlers are also common and are symptomatic of skin conditions due to pollen.

Diagnosis and Tests for Hay Fever in a Child

Hay fever is not particularly hard to identify, as the symptoms repeat themselves at the same time every year. If you think that your child may be suffering from hay fever, you need to consult a doctor as soon as possible. He will most likely diagnose the disease with a simple physical examination, but if that is not deemed possible, the doctor might suggest that you take your doctor to an allergist. The allergist will carry out blood tests or skin tests to determine the condition of the child.

There are two types of tests that doctors can do:

How to Treat Seasonal Allergies in Children

Hay fever treatment for children has more to do with prevention rather than curing it, as an allergic reaction can never be cured in the child- they can only be carefully reduced. Nasal sprays and antihistamines reduce these reactions in the body of the child and relieve the symptoms. Immunotherapy is another option, as it aims to desensitize the body towards the foreign pollen by gradually introducing it into the child’s body.

Can You Prevent Your Child From Getting Hay Fever?

Preventing hay fever is not a viable option, as the chances of a child becoming allergic to pollen mainly depend upon his genetic makeup. However, the environmental factors can be controlled, and parents can reduce the frequency of these reactions and the degree to which it affects their child. This can be one of the best ways to provide relief from hay fever.

Tips to Minimise Your Child’s Exposure to Pollen and Mold

Hay fever in toddlers can be controlled, but not completely prevented. Here are a few tips on how parents can reduce the effects of seasonal allergies in babies.

Hay fever in babies and toddlers is a real problem, one that requires constant care and has no real solution. While hay fever can be adequately controlled, you should take your child to the doctor if your child doesn’t feel better soon enough.