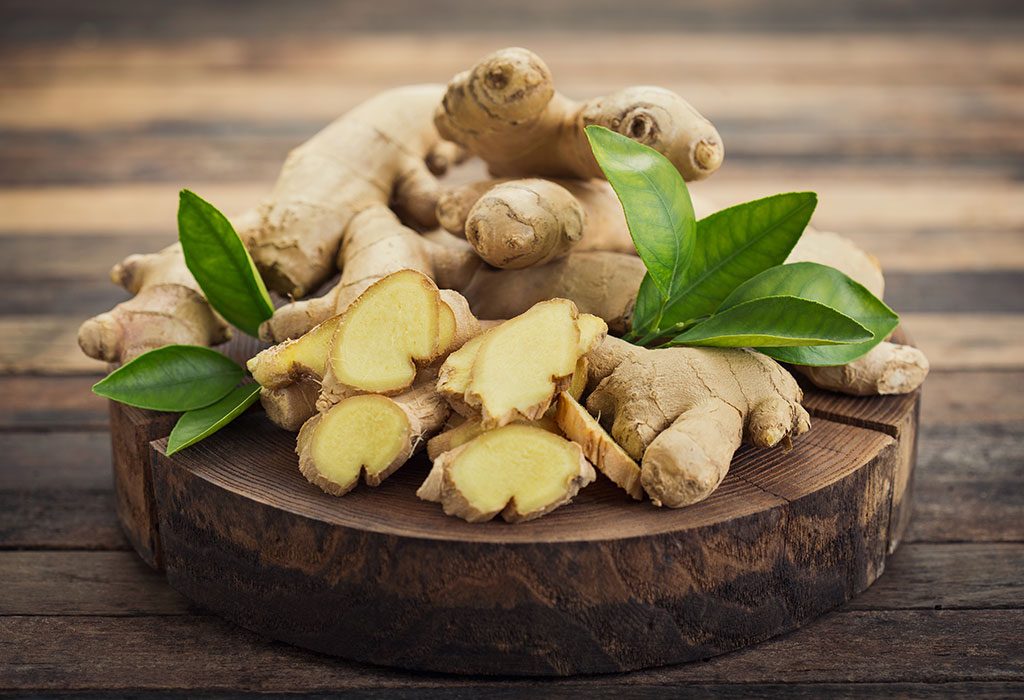 Ginger is one of the most popular dadi maa ke nuskhe, for infants and adults alike. And with good reason, too. If you’re wondering how you can add ginger to your baby’s diet, you’re at the right place. Keep reading to understand the benefits of ginger and the precautions you should take while giving a piece of ginger to your little one.

Is It Safe to Give Ginger to Babies?

Ginger is believed to be quite safe for infants. Yet, if administered in excess, it can result in a ton of health complications. Once your baby has crossed the 9-month milestone and started eating solids, you can start giving ginger in small amounts. In just 100 g of ginger root, the following concentration of nutritive ingredients can be observed.

In addition, ginger also contains various biochemical compounds such as curcumin, camphene, terpenes, limonene, and many others.

Health Benefits of Ginger for Infants

Although ginger is most commonly used to relieve cough in babies, it has other benefits, too.

Flatulence or gas problems can be both irritating and uncomfortable for babies. The use of ginger for treating stomach issues, primarily the presence of gas in the intestine, has existed for ages. Giving it to the baby can help reduce the passing of gas by a considerable amount.

The human liver is one of the strongest organs in the body as it can digest almost anything. However, when a baby’s liver is still developing, food poisoning could quickly become complicated. Ginger extracts increase the tolerance of the liver.

As the season changes, babies become more prone to seasonal ailments like flu, and cold and cough. Ginger helps provide the first line of defence in this regard. Of all the respiratory issues, parents dread bronchitis the most. In this, the mucous membrane gets inflamed, causing problems in breathing. Give a mixture of dry ginger powder, pepper, long clove powder, and honey thrice a day to boost immunity.

Whooping cough is contagious, and prolonged coughing can cause abrasion in the lungs. Your baby’s respiratory system is delicate and needs something to give it a boost. A mixture of ginger juice and honey, given in small quantities, can help your infant recover from the cough.

Motion sickness can even happen to babies when they travel onboard a car or plane. If your baby faces nausea and motion sickness, giving a small amount of ginger can help keep the food down, and reduce the chances of vomiting and acid reflux.

Be it intestinal gas, colic spasms, or other stomach issues, there’s nothing that a small dose of ginger can’t fix. Mix some ginger juice with a little lemon juice to help set the stomach right. A couple of doses every day can reduce these problems substantially.

Ginger has the ability to battle digestive problems in infants effectively. Indigestion, bloating, and constipation can all be prevented by using ginger in your baby’s food.

How to Add Ginger to Your Baby’s Diet

Here are some recipes that incorporate ginger:

Take a few pieces of ginger and add them to a pan that has water. Let the water reach boiling point. Then, let the concoction simmer for a few minutes on low heat. Turn off the flame and strain the liquid. Give this twice a day.

If your child has started drinking cow milk, you can add dry ginger powder to it. This is a great remedy for cold and cough in kids.

Boil a few pieces of ginger in water. Once the vapour starts wafting, tell your child to inhale the ginger vapour. This method is considered safer than the vapour rubs available in the market.

If your child is older than two years, he can suck on ginger candy for relief from flu and motion sickness.

Safety Measures You Should Take While Giving Ginger to Your Baby

Before using ginger in your baby’s food, remember these things:

There are many ways of ensuring that your baby gets all the medical benefits of ginger. We recommend getting your paediatrician’s go-ahead before feeding ginger to your infant.