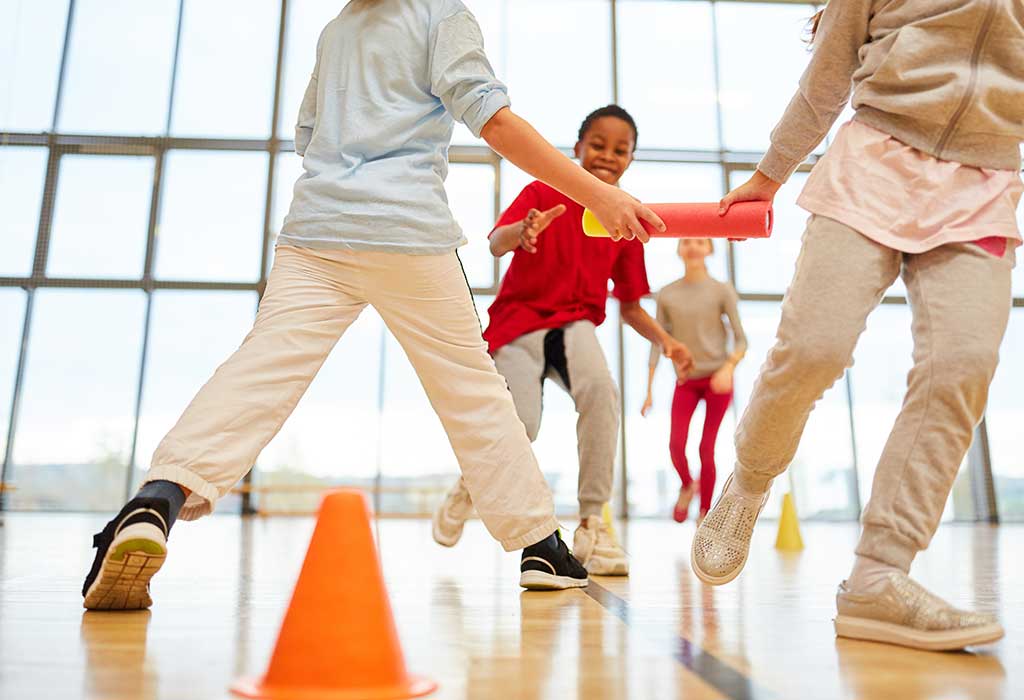 Children love races and always are up for the challenge to beat their peers in a game of “who can run the fastest?”. Relay races are even more fun, with kids competing to burn off that extra energy. Popular in summer, barbecue parties, and camps, a relay race for children can hold their interest for a longer time.  A relay race can make for a healthy impromptu exercise.

Try these 20 kid-friendly outdoor and indoor relay race ideas to get you started to turn the fun quotient up. They make for fun activities at a birthday party or even a family reunion. Some can be done indoors whilst some may need some preparation. But they can all be fitted and customized to fit any party theme or occasion.

All you need is some sacks and participants to get into a crazy mood. This one is a relay twist to the popular sack race.

Get kids to get in a potato sack and hop to a designated point and turn back. When they reach the start line, they need to get out of the sack and hand it to the next participant in line. The winning team is the one where all participants have completed the task. You can swap the sack for a large pillowcase for younger kids.

With some spoons and eggs, you can have a whole lot of fun. This could be played indoors and outdoors but make sure to swap the real eggs for plastic ones while playing indoors.

Divide the participants into two teams. Every participant in the team needs to carry the spoon in their mouth and balance the egg on it from the start point to the finishing line and turn around. As they approach the start line, they need to place the egg on the spoon of the next participant’s spoon. The first team to complete the race wins.

You can achieve wonders with just an exercise ball and some cones. A great race to get kids not just to run but also to flex their muscles.

Set up cones in a straight line. Make sure that there is enough space between the cones so that the ball can roll freely. Try getting kids to roll the ball as they run through the cones and time them. Alternatively, you could have two teams and the team where all the participants finish rolling the ball and complete the race win.

Another great idea with just newspapers. This one needs kids to have good coordination skills.

5. Fill It With Water Race

It a messy one, but this one promises a whole of fun, especially in the summer.

Set up obstacle courses everywhere with tables, chairs, rocks, etc. Give the participants plastic cups and a bucket full of water. They have to fill the cups and place them by the obstacles as they go along. The participant, to return with a full bucket of water back to the start line, wins the race.

A hilarious game. This will have your onlookers in splits.

Fill two boxes or suitcases with a variety of clothes. Divide the group into two teams. The first player has to run to the pile, put on all the clothes on top of theirs, and return to the start line. They need to take their clothes off, and the next participant will have to get them on and run to the finish line before returning to the team. The process is repeated until all players have finished.

A great way to get kids to think quickly and act fast.

Divide the group into two teams. Kids have to either pass a bean bag or a ball first under their leg and over their head to the next participant and, once done, must move to the back of the line. This needs to be done until the first participant comes back to the front of the line.

Kids need to be observant to play this game.

Not a simple one, but this one promises loads of fun.

Divide the group into two teams. Loop a hula hoop into one player’s arm. Get each team to join hands and form a circle. Without letting go of the other player’s hands, the player with the hoop must step into and through the loop so that it rests on their other arm. They then slide it into the other player’s arm, who would need to perform the same manoeuvre. The team that passes the hoop through the whole circle wins the game.

This game works on coordination and teamwork. It is a great activity to build resilience in kids.

Partners hold a pool noodle with a beach ball in between the pool noodles. Players have to race from start to finish without letting the beach ball fall to the ground.

This one is a wonderful race to get kids to test their balance and body coordination.

Players need to run to the endpoint, stop, lie down on their backs, fold hands across their chest and get up, moving their arms. They need to run back to the start line.

A wonderful way to get kids to move their whole body from start to finish.

Divide the group into two teams. Get the players to stand in line with their legs apart. The first participant needs to crawl through the human tunnel to the end line, and the rest of the participants follow. The team which finishes first will win.

Great entertainment for kids and a lot of mess with water splashing all over.

Divide your team into two. Get them to stand in rows. Fill a bucket of water in the front and leave an empty bucket at the back of the row. Give a sponge to the first participant, and they need to dip the sponge in the bucket and run with it to the end and squeeze all the water out. They will then hand the sponge to the next participant, who will repeat the process. The team which has the higher amount of water in the bucket at the end wins.

Kids need to be careful when they play this one as it requires some concentration.

Divide the group into two teams. Have two points, start point, pick up point and turn around point. Place a few empty egg cartons at the turn around point. Players have to run from the start point, pick up a coin from a bowl at the pickup point and run to the egg cartons and fill them. They will then run back to the start line, where the next participant will continue the process. The first team to fill up the egg carton and come back to the starting point wins.

A fun game where kids will be trying hard to stand straight and race at the same time.

Pair kids into two’s or let them pick a partner. Tie up one leg of the kids with their partners with a scarf, bandana, or fabric sashes. This becomes their third leg. The partners then have to walk from the start line to the finish line. You could also tie their arms by making them stand with their backs to each other. This requires more coordination and communication skills.

It is a race with some noisy fun.

Tie up an inflated balloon to a chair. Get the participants to run to the chair and pop the balloon. Alternatively, you could also have a box filled with balloons. Kids will need to run and pick a balloon and bring it back to fill an empty box at the start line.

Kids need to play the role of waiters at a restaurant.

Hand out a plate to every kid and place a ping-pong ball on it. Kids have to carry the plate over their heads from the start line to the finish line and hand over the ping pong ball to the next participants. The team where all participants head back to the start line first win the race.

This one needs kids to be vigilant and also agile.

Kids have to keep a water balloon under their armpits and run from the start point to the finishing line. The rules can vary, and if the balloon bursts, they can take another one. Play it in teams to see which one wins.

Loads of fun, this could be a game for Halloween too.

Place a broom on chairs. Divide groups into teams and get participants to run from the start line to the finishing line. When they reach the chair, they need to crawl under the broom without knocking it off. They run back to the start line, where the next participant follows.

Running, hopping, and jumping – all in one race.

With so many ideas, there is no way that one will get bored during the summer. So next time you are having a party or a sleepover in summer, pick one of these to get the kids to have fun.

Previous article « Actress Dia Mirza is Expecting Her First Child With Husband Vaibhav Rekhi
Next article Is It Safe to Use Deodorant for Kids? »