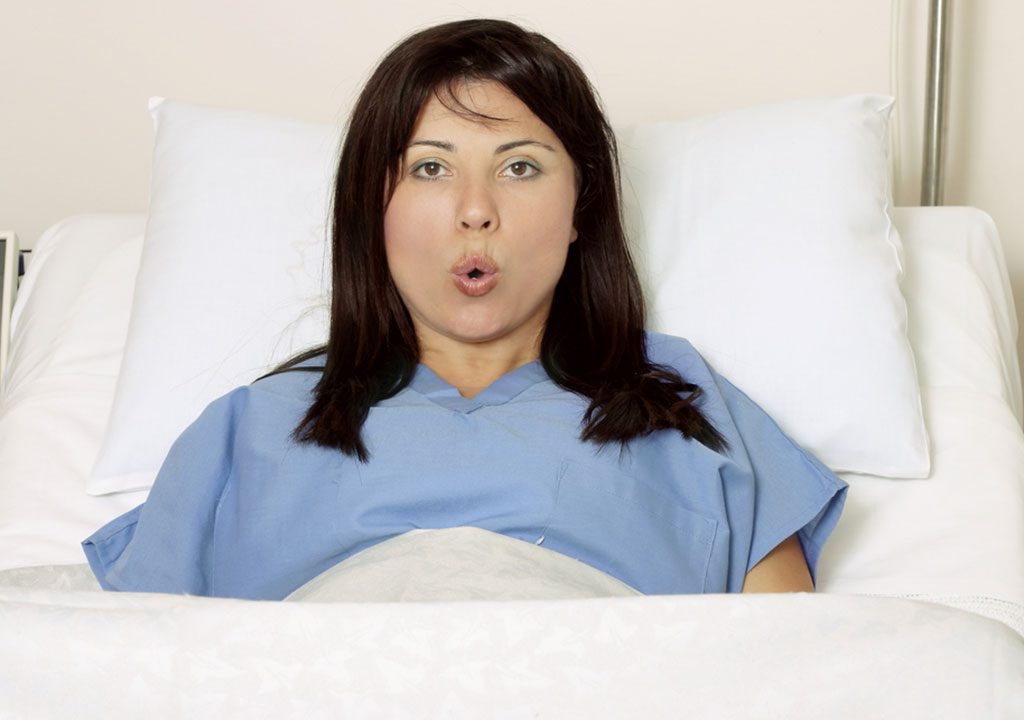 Breathing and relaxation techniques help women cope with the stress of labour. It’s natural to go into a panic and fight the process. Instead, with patterned breathing, it is possible to harmonise with the labour and make it easier while you remain in control of your body.

Importance of Breathing and Relaxation Techniques in Labour

As a woman goes into labour, the body briefly goes into a panic response due to the stress of the moment. This induces panic breathing which is shallow and rapid. Such breathing causes the body to tire out quickly, exhausting the woman and increasing the risk already involved in childbirth.

Patterned breathing being the most recommended technique for relaxation, gives women a better handle over their bodies during labour. Using any of the following methods, women can stay focused and breathe through the pain.

This method works on both the psychological and physical levels. The word “relax”, having two syllables “re” and “lax” can be repeated in your mind as you breathe. As you inhale, think “re” in your mind and as you exhale think of “lax”. Let your mind stay on this and focus more on the out-breath “lax” part, and making it longer than inhaling. Feel your body and the tensed muscles relax as you exhale in this method.

In this simple method, you can count numbers slowly up to three or four or any other number you prefer as you inhale. Count again as you breathe out to the same number and try to make the exhale have one extra count. For example, if you are inhaling up to three, exhale up to four.

This is one of the most straightforward breathing techniques for natural labour. Inhale through the nose and exhale softly through the mouth with a sigh. It may also be helpful to make a sound along with the out-breath such as “oooooh” or “aaaaaah”. Relaxation techniques for pain management in labour are anything that calms your mind and body down and releases the tension in the muscles. Several methods can be tried out based on the woman’s preference such as:

A gentle massage by your birth partner during the early stages of labour can be very relaxing. Gentle kneading and stroking of the shoulders, back, thighs and buttocks can ease the muscular tension and relax you.

A method that is gaining popularity eases labour pain by the pressure, pulse and warmth of a shower in the first stage of labour. The second phase involves the buoyant weightless freedom of a birthing tub.

What we see, hear and smell can profoundly influence our emotions. Giving birth in a relaxed environment with soft light and filled with an aroma that you find comforting can help you stay relaxed. Playing calming music can also help you stay focused during the labour.

Reflexology involves applying pressure or strokes on specific points and areas of the feet to relieve tension or pain in other parts of the body. This is hypothesized to stimulate nerve endings that release endorphins and monoamines that control pain.

The central idea of this method is “Mind over Matter”. You can begin by observing parts of your body that are tensed or in pain and start to let go of those tensions mentally. Visualizing that your body is free from pain and tension can help it relax. How Can Breathing and Relaxation Exercises Help During Labour?

Rhythmic breathing helps maximise the oxygen available to you and your baby. The breathing techniques prevent panic responses and the resulting stress and muscular tension that would burn you out quickly. It is important to conserve your energy to make it through the labour without complications. The breathing exercises go a long way in helping you stay energized.

How to Practice Patterned Breathing Techniques in Labour

To begin patterned breathing, take a deep, cleansing and relaxing breath at the start and end of each contraction. This organised breath replenishes your oxygen and sets up a rhythm.

Breathing Pattern for the First Stage of Labour

There are three types of breathing patterns that can be used during the first stage depending on your comfort.

Breathing Pattern for the Second Stage of Labour

Once the cervix is fully dilated, you can switch to this next breathing technique for the second stage of labour. Breathe as the contraction begins and picture the baby moving down and out. Use light breathing initially for comfort and to harmonise with the contractions. When you can’t resist the urge to push anymore and that you need to join in with the contraction; take a deep breath, tuck the chin into the chest and lean forward as you curl your body. Bear down holding your breath, slowly release the air in grunts or moans. It is important to relax the pelvic floor and help the baby come out by relieving any tension in the perineum. Release the breath after 5-6 seconds and breathe in and out in calming breaths to relax and repeat as the contraction begins again.

What Are the Benefits of Patterned Breathing Techniques for Labour?

During both stages of labour, there will be times when you feel a strong urge to bear down or push, but it isn’t the right time. The high stress in this state makes your breathing irregular. Holding the breath in adds unnecessary pressure at the wrong time. Breathing exercises such as raising your chin and blowing or panting can ease this and help avoid pushing at the wrong time.

Breathing and relaxation techniques are instrumental in helping you get through labour. Your doctor or midwife can also help you in learning, refining and practising them.

Also Read: A Guide to the Lamaze Method of Childbirth

Previous article « Do You See a Faint Line on the Pregnancy Test – Are You Pregnant?
Next article Effective Ways to Deal with Stubborn Child »