Eating Liver During Pregnancy - Is It Safe?

Eating Liver During Pregnancy – Is It Safe?

Eating Liver During Pregnancy – Is It Safe? 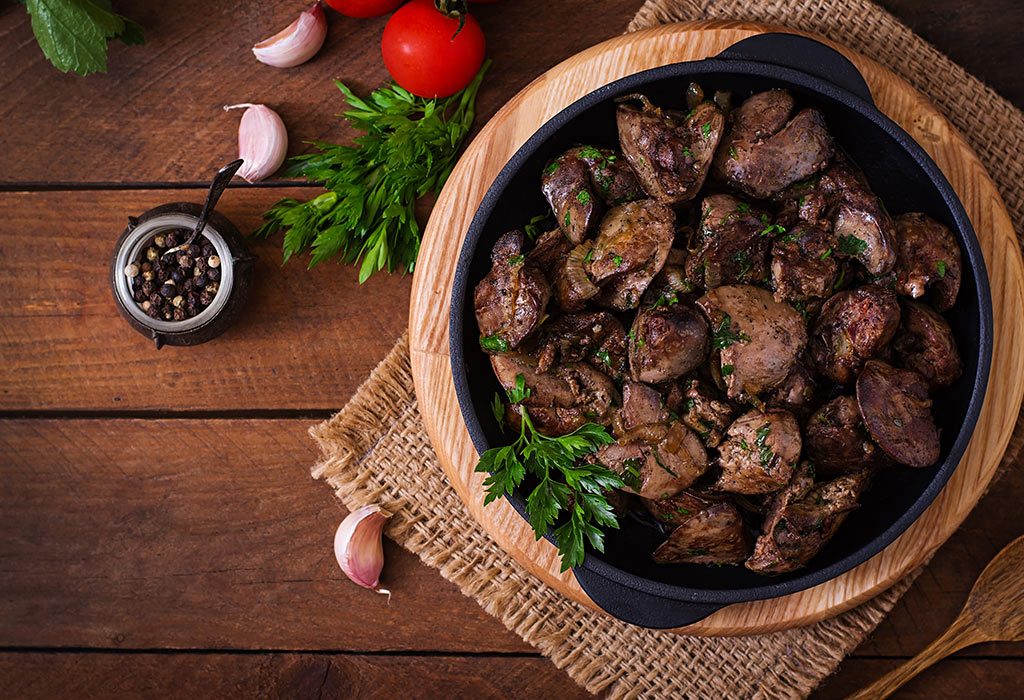 Pregnancy requires you to change your diet to one that provides you with all the nutrition you need. Since the focus is on a balanced diet, including meat is a given for it provides a good dose of protein. But, meat preparations, because they come in different forms with different components, might raise questions on their safety, especially during pregnancy. Since pregnant women are at a high risk to suffer from anaemia, they might instantly think of adding liver to their diet plan. But, is it safe to eat liver during pregnancy? Let’s find out.

On a general note, consumption of liver is not forbidden for pregnant women. The liver is known to contain a variety of substances that can be quite beneficial for the mother as well as the growing child. However, the liver also has a component called retinol which increases the risks of foetal malformations. Therefore, the portions need to be maintained as excessive consumption of liver can be harmful to foetal health. We shall talk about the harmful effects of consuming too much liver later in the article. Let’s first take a look at the health benefits and the right portions (or amount) of liver you can safely eat.

Benefits of Consuming Liver During Pregnancy

The liver contains some vital elements that are considered essential for a mother and her baby in pregnancy, which makes consumption of liver quite a beneficial choice. Here are some of them:

What Is the Amount of Liver That Is Safe to Consume During Pregnancy?

It is safe to consume 65 to 75 grams of well-cooked liver per week to gain health benefits; however, the portion may vary because the liver coming from different sources have different levels of retinol. Some might be advised to reduce the quantity and frequency of eating liver to avoid health complications. It is generally in your best interest to keep its consumption restricted to once a week or twice a month. So, in what forms can you eat liver during pregnancy? Read below to know more.

In meat preparations, the liver is generally presented in more than one style, in order to suit different palates. As much as the source might govern its edibility, the style generally doesn’t. You can, therefore, go for the following forms of liver:

Now, let’s come to the most important part of the article – the risks associated with eating liver during pregnancy. Every expectant mother must know about the risks to make an informed decision of either avoiding liver or seeking immediate medical attention when needed.

Risks of Eating Liver During Pregnancy

Meat is generally beneficial for a mother, but if consumed in large quantities, it might affect foetal health. Read on to know the risks associated with eating liver.

You must also know that retinol is also present in some products we use in our daily lives. Therefore, you must avoid some liver products too that could harm your baby.

Liver Products to Avoid During Pregnancy

You might be abstaining from consuming any liver directly, but there are certain products that ought to be avoided as well, which contain liver constituents in their preparation, or derivatives of the same. These usually are:

Alternative Sources of Vitamin A

Vitamin A is absolutely essential for babies. You don’t need to depend purely on the liver for it since it can be easily obtained from numerous other sources. Vegetables are a much safer choice in this regard, since vitamin A is present in the form of beta-carotene, instead of retinol. Some of these are:

Eating liver during pregnancy when you have cravings for it isn’t harmful to you. Preparing it the right way and restricting its consumption to the occasional luxury can help you enjoy the taste of it while keeping you safe from its possible harmful consequences.

Also Read: Eating Burgers During Pregnancy – is it Safe?

Previous article « Daycare Centre for Children – Pros and Cons
Next article Does Orgasm Increase Your Chances of Getting Pregnant? »