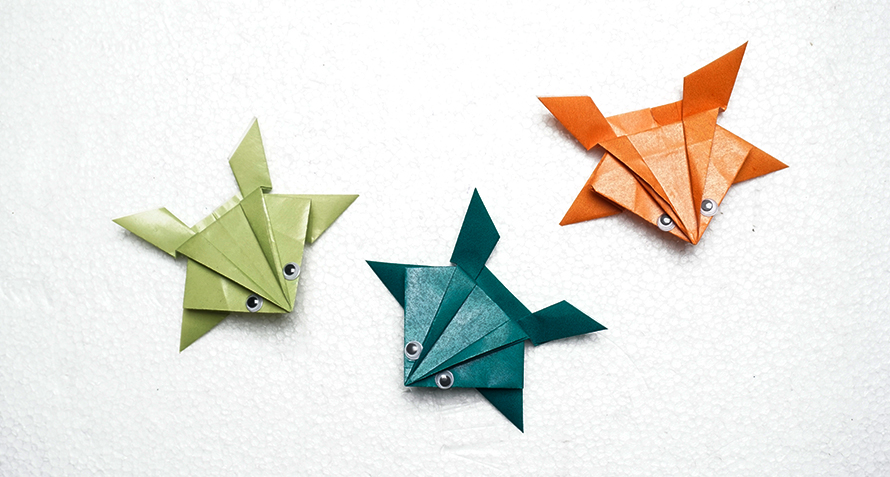 Ribbit ribbit! Frogs are such adorable and cool creatures. Introduce your child to these fun jumping frogs!

These cute little jumping frogs will keep your little one engaged for a long time – and they’re not dangerous either! This might even encourage your kid to take an interest in nature and the various fascinating creatures found in it.

1. Take the square sheet of Origami paper and fold and unfold it diagonally (both diagonals) to form creases

2. Fold and unfold the paper in half horizontally to form creases. Make sure that the creases of the folds meet at the center of the paper

3. Using the ends of the center fold, push in the sides so that the paper folds into a triangle with four points – two on each side

5. Fold the bottom corners of the diamond inward and crease it

6. Fold the top corners of the diamond outwards and line it with the botton edge of the diamond to form the frog’s legs. (The end result should look similar to a paper airplane on a triangle)

7. Flip the paper over  to start working on the top part of the frog

9. Fold the inner edges outwards in a way that the edges line up with the ends of the paper

10. With the long back legs facing you fold the paper in half where the frog is narrowest and crease it

11. With the frog still folded, flip the frog over again

12. Leaving a little space, create another fold  near the crease  to make the legs face backward and crease it

13. Flip it over and your jumping frog is ready!

14. You can stick googly eyes if you wish.

15. To make the frog jump – just press and release the back of the frog!

Fine motor skills, curiosity and interest in the natural world, cause and effect relationship

Previous article « Holiday Time – Not For Working Parents!
Next article This Mom Received Death Threats Because of Something She Did to Her Baby Girl »