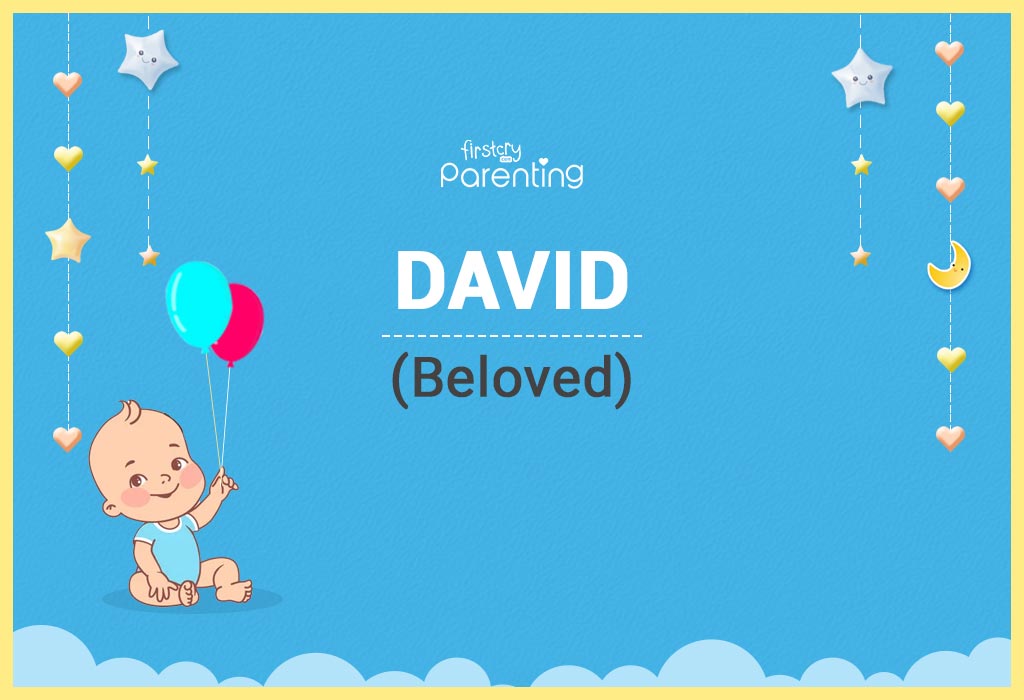 David is a beautiful masculine name highly popular with parents as numerous parents worldwide adore the name for its beautiful meaning and Biblical significance. The attractive name is equally popular in English-speaking and non-English-speaking countries, such as Saudi Arabia and India.

What Does David Mean?

The English name David is an important biblical figure. David appears in the Old Testament as the second king of Israel. The young shepherd, David, defeated the giant Philistine Goliath with just a slingshot. The meaning of David is “beloved” or “beloved of Jehovah,” which signifies the beloved of God. It is an apt name for your loved baby boy. The name holds special significance in Jewish culture as the symbol of Judaism is the Star of David.

David is an English masculine name derived from Dawid – a Hebrew origin word evolved from “dod,” which means “beloved.”  It is also said to be from “Dodaveha,” a Hebrew word meaning “Beloved of Jehovah.” Though it is the Old Testament that first mentions David, as per the New Testament, David was the ancestor of Jesus. Due to its Biblical Hebrew origin, David is a prominent name in Christian, Judaism, Sabbatean, and Islamic religions and languages.

How Popular Is the Name David?

David has been a popular name in Britain, especially in Wales, since the middle ages. The credit for the popularity goes to the saint of Wales, a 5th-century patron honored with David’s name. In Scotland, David was the name of two kings. In the 1950s and 60s, David was the top-ranked name in Wales and England.

In the last century, David has consistently been on the top 30 masculine names list in the U.S. In 1900, David ranked at #32 in the United States as per the Social Security Administration, while the level of the name’s popularity reached its peak in 1960 as it hit the #1 rank in America. For the next many decades, the David baby name ranking remained in the top 10 choices for baby boy names. This continued till 1993 when its popularity slowly decreased, and it dropped from the top 10 list.

Interest in David – the US

The popularity of name David

Search trends of David in the US

Middle Names That Go With David

Choosing a suitable middle name can be a more daunting task than deciding the first name for your baby. Some double names with David for you to choose from are:

The name David is not just adorned by people of old ages, but also in modern popular culture. Some of the well-known characters with the name David include:

Many names that rhyme with David may have different meanings. But these similar-sounding names incorporate the beauty of the name while lending a modern touch. Some of the names that sound like David are:

Similar or connected sibling names feel beautiful. Many meaningful sibling names go with David that will make all your children’s names seem connected. Some sister and brother names for David for you to shortlist are:

Nicknames show your affection for your baby without expressing it in words. Some nicknames for your boy named David are:

Is David a Strong Name Choice for Your Child?

David is a strong traditional name used for centuries and is still being used in its prime. This biblical name is derived from the heroic King David mentioned in the Old Testament in the Bible. If you are looking for a timeless piece with a good meaning, then David is the ultimate name to make your final list.

David will always be a good choice for a boy’s name. The name, with its biblical connotations and meaning, is ideal to name your beloved son. Despite its ancient origin, David remains a timeless name that is classic and strong.