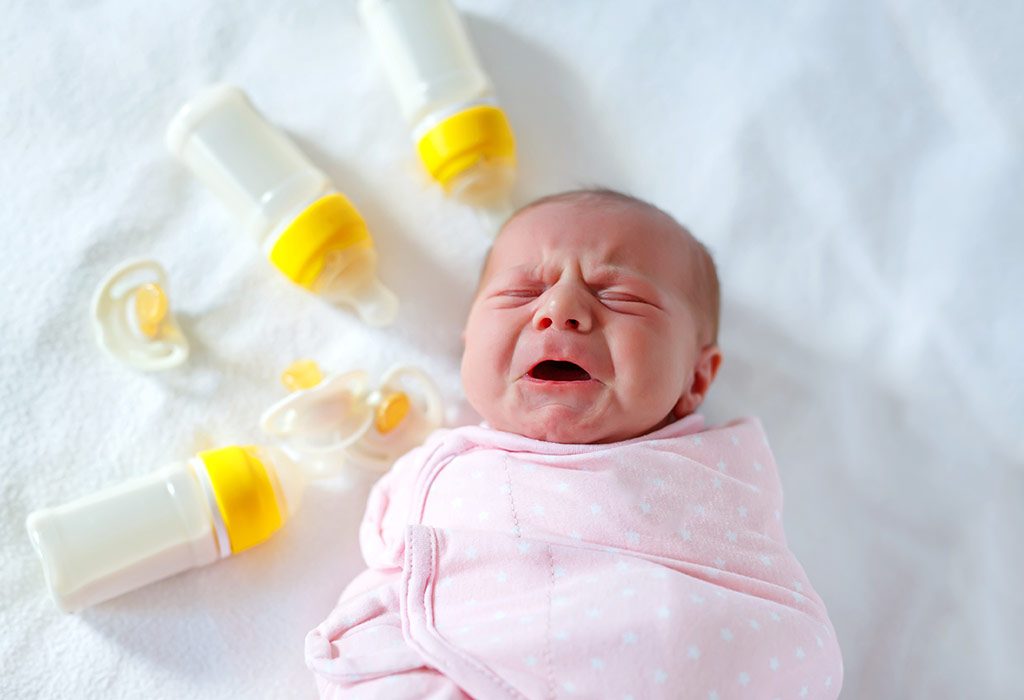 Many of us have fond memories of being fed cow’s milk by our mothers when we were young. This delicious and nutritious drink is often offered by itself, with cornflakes and oats, or in milkshakes, etc. to kids. However, since a baby’s digestive system isn’t as developed as a ten-year old’s, one wonders if it is the ideal drink for an infant. Here, we discuss if cow’s milk is suitable for babies, and if not, when it can be introduced to them.

Can We Give Cow’s Milk to a Newborn Baby?

Cow’s milk isn’t recommended to newborn babies for a variety of reasons.

While feeding milk is not advised, milk-based products such as yoghurt and cheese are still considered acceptable for babies below one year of age. However, we should refrain from offering them cow’s milk independently. This is because the amount of sodium in cow’s milk is much higher than what a baby’s kidneys can handle.

When to Introduce Cow’s Milk to Kids

Most parents who feed formula milk to their babies are keen to transition to cow’s milk. This is mainly because formula milk is expensive and exclusively for the baby’s consumption. Cow’s milk, on the other hand, is purchased for the whole family anyway, making it a cheap alternative. If the baby doesn’t have a family history of lactose intolerance or dairy allergy, he can be introduced to cow’s milk after 1 year of age.

Remember that if your baby is breastfed until the first birthday, they are getting the best nutrition milk can offer! Not only is breast milk ideal for human babies, but it also has the right mix of nutrients that your child needs for growth and development. Breast milk also has a higher fat content, which is vital for the growth of your baby (Yes! Higher than cow’s milk too). Cow’s milk (which is also species-specific composition) just happens to be the most convenient source of calcium, protein, fats and Vitamin D. While it provides no competition to breast milk, it does offer a viable alternative to mothers who plan to wean their child from breastfeeding, when he turns one year old.

How to Introduce Cow’s Milk to a Baby

Cow’s milk can be introduced to babies after their first birthday, but in small quantities. To start off, it can be mixed with breast milk, formula milk, or boiled and cooled water to allow the baby to have a smooth transition. You can consider sneaking it in other foods of your baby’s choice, initially, to check if he is able to digest it without any issues. Cow milk is good for babies as it has a good amount of calcium, which is vital for developing strong bones, teeth and muscle growth. It contains Vitamin D which helps in the absorption of calcium in the body.

Milk also carries a high amount of protein, which helps your baby grow. It also contains carbohydrates, which give your child the energy required throughout the day. A child with abundant levels of calcium will have stronger bones, healthy blood pressure, and a healthy heart.

How Much Milk Does Your Toddler Need?

A one-year-old can be offered about 8 to 12 ounces of milk, daily, after a gradual introduction. You may also offer a dairy equivalent of this in the form of yoghurt or cheese. Some children may take a liking to this taste and prefer this over regular meals as well. However, you should restrict the intake, as it might limit their appetite for other solids. This could be counterproductive, as your child will not have a balanced diet.

You may also consider offering milk as a beverage in between meals and not as a substitute for the meal itself. It is important to remember that your toddler may not chug down the glass of milk as he did during bottle feeds. This is perfectly fine. Intake of cow’s milk is a nutritional supplement and an optional beverage. The same nutrients can also be received from a variety of other foods.

Side Effects of Cow’s Milk

As always, the introduction of any food to your baby must follow the three-day rule. Monitor your child closely after you start them off on any new food. The same applies to cow’s milk as well.
Some babies may be sensitive to the dairy intake of their mother as well. Close monitoring of symptoms such as overall restless behaviour, diarrhoea, vomiting, relentless crying, flatulence or noisy bowels could indicate this.

You might wonder, ‘Why is cow milk bad for babies?’ Cow’s milk has a higher concentration of proteins, sodium, calcium, and Vitamin D, and sometimes strains the digestive systems of babies. You must watch out for the following symptoms to ensure your baby is able to digest cow’s milk well.

Rashes, breathing issues and wheezing can all be a result of cow’s milk allergy in babies. Symptoms can be more extreme, such as constipation, hives or a stuffy/ itchy nose as well.

Lactose intolerance can show up as vomiting, gastrointestinal, stomach upset, and even diarrhoea in babies on the introduction of cow’s milk.

What to Do if Your Baby Refuses to Drink Cow Milk

There are a few tips that may help your child accept cow’s milk more willingly.

1. Try to warm the milk before offering it. Most of the time, toddlers refuse the milk, as cold milk is unusual for them. A slight temperature variation can do the trick.

2. If the child doesn’t seem to like the taste, you can consider giving it as a milkshake or mixed with other food such as cereal, porridge etc. It also helps make the milk look interesting by adding natural colours to it.

3. Make milk-drinking fun for your child! Create positive associations with verbal or other rewards for drinking milk each day.

4. Offer it in a colourful sippy cup or with a straw. You can even consider buying a new cup just for this purpose and declare it to be a special cup so that the child looks forward to drinking anything out of it.

5. As a last resort, you can sweeten the milk. It is best to stay away from this practice as it gets the child habituated to the taste. You can try natural sweetening by adding fruits or dry fruits to the milk. Which Type of Cow’s Milk to Choose for Babies: Whole Milk vs. Low Fat Milk

Until two years of age, children need to receive whole milk. This is because the fat in it is essential for their growth. After that, the transition to low-fat or regular milk can be made. Depending on the weight range of the child, a smart choice can be made. Babies who are overweight or on the heavier side can be given low-fat milk from the start.

Though milk is a popular drink around the world, it may seem surprising that it isn’t recommended for infants from the go. However, once the one-year age barrier is crossed, one can transition towards milk and milk-based products.

If your child is allergic to cow’s milk or lactose intolerant, here are some alternatives that you could try giving him instead.

A popular alternative to cow’s milk, soy milk is widely available and affordable throughout the country. This also has a similar nutritional value as that of cow’s milk. However, soy milk is an acquired taste that your child must get used to.

Rich in Vitamin B12 and Vitamin D, coconut milk is healthy and readily available as well. It is also creamy and tastes great. One con to this alternative is that coconut milk has a lower proportion of proteins and calcium to cow’s milk, so you may need to make up for the deficiency with other foods

Almond milk has a neutral taste and creamy texture and is available in different flavours. This is also highly nutritional and low in calories. However, the price of this alternative is much higher.

Cow’s milk can provide a baby with essential nutrients, once he turns one-year-old. It is neutral tasting and can be easily flavoured. However, make sure to follow precautions when introducing cow’s milk to your baby’s diet to ensure he is not allergic to it.