Home Baby Cloth Diapers Versus Disposable Diapers – Which One You Need to Choose? 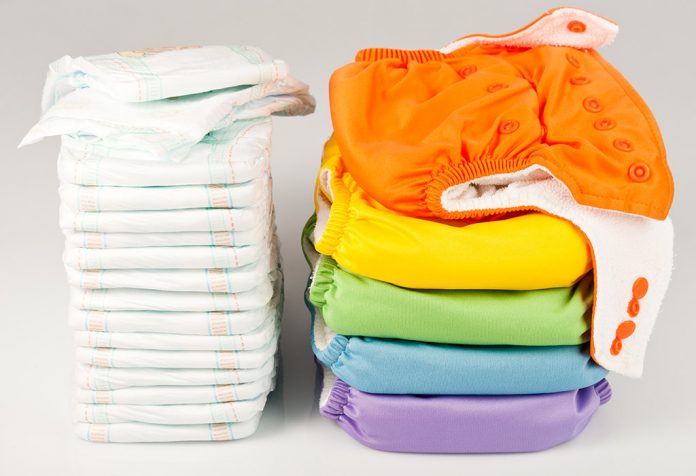 Among all the parenting choices you will have to face, the type of underclothes required for your baby is one of the more important ones. This is because these regions are very sensitive and can suffer from rashes and other discomforts if the baby’s excreta are not taken care of promptly and efficiently. The most common options available are disposable diapers and cloth diapers. Is it better to use cloth or disposable diapers? Read on to know more about them so you can make an informed decision.

What Are Cloth Diapers?

Cloth diapers are traditional diapers, having been used for thousands of years. They are made from natural materials, such as cotton. They come in various forms such as flat, pre-folded, fitted, contoured, tied-up, shaped and so on. Most cloth diapers these days are hybrid diapers, which contain an outer waterproof cloth and an inner water absorbent material. The most important thing to know about cloth diapers is that they are reusable, as they can be disinfected and washed much like any other clothing.

What Are Disposable Diapers?

Disposable diapers were invented in 1948. They have extremely absorbent materials in their inner lining, making them far more efficient than cloth diapers while still providing similar comfort levels. Because of this, they soon took over the market from cloth diapers and are now the most common form of diapers used. Disposable diapers are one-time use only as they cannot be cleaned and must be discarded.

Cloth or Disposable Diapers – Which is Better?

It is not easy to decide whether to use cloth or disposable nappies, as they both have their own advantages and disadvantages. However, you can decide yourself once you see what both types are offering. Here are some pros and cons of cloth diapers vs disposable diapers.

Cloth diapers are made from natural materials such as cotton, hemp, flannel, muslin, wool, bamboo, linen and even silk. These materials are used in conjunction with human-made materials like nylon, suede and polyester which are used as non-absorbent liners and allow the diaper to remain dry. On the other hand, disposable diapers are made of polytheylene, polyurethane, or similar plastics, and offer a better level of absorption. In terms of comfort, babies wearing disposable diapers were found by research groups in Germany to have considerably higher genital skin temperature, which could potentially lead to a reduction in sperm production. On the other hand, cloth diapers offer enough space for the baby to move around slightly, while still holding everything in place. This allows air to circulate inside the diaper, cooling the baby’s skin. Disposable diapers may have dyes and scents to impart pleasing colours and aromas. Certain chemicals used in the preparation of disposables are petroleum byproducts. Of these, chemicals like dioxin are known to be carcinogens. Some of these chemicals might also worsen symptoms of asthma in babies. However, there are no clear studies showing that disposable diapers have any effect on babies’ health. In addition, disposable diapers lead to far less diaper rash incidents as they are much more absorbent. However, if you are the kind of parent to err on the side of caution it would be advisable to use cloth diapers instead. To counter the rash problems encountered with cloth diapers, simply change your baby’s diapers more often.

Cost is a major factor for most people as diapers are going to be required for at least a couple of years. Buying disposable diapers only for your child will cost around five times as much as using cloth diapers instead, even if you employ the expensive kind of cloth available. However, there are obviously some side costs to look into when using cloth diapers. For example, using washing machines for cleaning them will increase your water and electricity bills; new diaper liners have to be bought regularly; baby-friendly detergents are expensive, buying extra paraphernalia such as drying racks and so on.

Disposable diapers are easy to use as they come with foolproof sealing methods that don’t take a while to learn. And while cloth diapers used to require a complex folding procedure to change babies, these days they come equipped with snap buttons or Velcro strips for closure. They also have leak-proof bands that prevent any wastes from escaping around the legs. However, as absorbent as cloth diapers can be, you will have to change them more often than you would a disposable diaper. Travelling with cloth diapers is a big problem as you will be faced with the dilemma of carrying soiled diapers around in your bag. Disposable diapers solve that problem entirely as one can simply throw them away when they are full. 5. Impact on the Environment

Most children will probably use up around five to seven thousand diapers before switching to underclothes and the production of disposable diapers has a severe impact on the environment. For example, cutting down trees, producing plastic, using various chemicals, transporting them, and finally allowing the waste products of these processes to pollute the air, water and soil have an adverse effect on the environment. More than a hundred billion disposable diapers carted to garbage dumps every year worldwide vastly increases the ecological footprint of disposable diapers. However, reusing a few cloth diapers, say around 30, is a great improvement. In addition, using disposable diapers means that your baby’s faeces will end up in a landfill, creating biohazard and promoting the spread of diseases, as human waste is meant to go into the toilet alone. When you use cloth diapers, your baby’s faeces will be flushed down the toilet into the sewage line, where the city or town corporation will effectively treat the wastewater, finally releasing it back into water bodies.

With a clear understanding of the pros and cons of each type of diaper, you should now be able to understand which one is for you. You can opt for one or switch between the two based on your convenience. At the end of the day, it really depends on your preference and the comfort of your baby so trust your instincts – after all, ‘Mommy Knows Best’!

Mom-to-be: A wonderful Journey to Remember for Life!