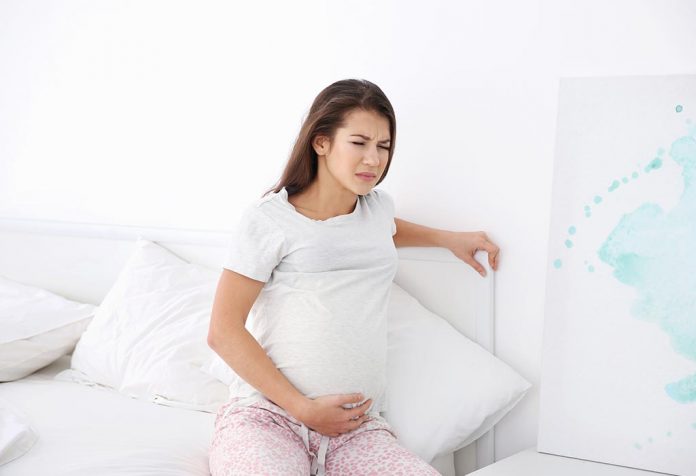 It can be unsettling for you if you notice brown discharge during pregnancy. Although it’s normal and, in most cases, just another part of the pregnancy, it can worry you to no end. Brown discharge is very common and you need not panic unless it is accompanied by other symptoms such as itching or foul smell.

What Is Brown Discharge During Pregnancy?

Discharge, in general, has a host of causes and isn’t a reason for panic. However, since bleeding during pregnancy is associated with miscarriage, it’s important to differentiate between brownish discharge and bleeding and take a call about visiting the doctor at the earliest signs of trouble. Brownish discharge can happen due to:

The fertilised egg travels to the walls of the uterus and implants itself, which may cause bleeding. Implantation bleeding can occur from 6 days after ovulation to the first few weeks of pregnancy. It also occurs, sometimes, as light-pinkish spotting a few days before the expected date of a period. Since menstruation occurs 14 days after ovulation, early implantation bleeding is sometimes mistaken for light and late periods.

Brownish discharge that happens just before the due date can be a sign of labour. When this happens between 36 and 40 weeks along with loss of the mucus plug, the discharge may be accompanied by a greyish, mucous and jelly-like blob which is blood-tinged or streaked with old, brownish blood. This happens when the cervix softens and a woman’s body gets ready for delivery and the mucus plug stopping the entry of infections into the womb is not required any longer. The plug and the discharge may be expelled all at once or in smaller bits over the course of a few days or weeks.

The cervix becomes flushed with blood during pregnancy, which makes it sensitive. Sexual intercourse or an intrusive medical examination can cause brown discharge and pain.

Brownish discharge is sometimes caused by a spontaneous expulsion of a molar pregnancy, an abnormality of the placenta. This is caused by problems during fertilisation. A genetic error during the fertilisation process leads to the growth of abnormal tissue within the uterus. Molar pregnancies are rare, occurring in 1 out of every 1,000 pregnancies, and do not usually result in a viable foetus. They instead involve the abnormally rapid growth of tissues. Brownish discharge and grape-like tissue are spontaneously expelled at the end of molar pregnancies.

Cervical polyps are harmless benign growth on the cervix. Brownish discharge during pregnancy is sometimes caused by bleeding from a cervical poly, due to the increased vascularity in the cervical tissue.

Brownish discharge is, sometimes, a symptom of an ectopic pregnancy, where the fertilised egg implants itself outside the uterus, mostly in the fallopian tubes. It is typically accompanied by a lot of dizziness, light-headedness and occasional fainting, pain on one side of the abdomen and pelvis, which comes and goes.

An ectopic pregnancy is a serious problem and can be associated with fallopian tube rupture and severe internal haemorrhage. If your brownish discharge is accompanied by these symptoms, it needs immediate medical intervention.

Brownish discharge can, sometimes, be a sign of a missed abortion. In this case, the pregnancy stops developing but the developed foetal tissue does not pass out of the uterus. When this does not happen for 4 weeks, dark brown spotting or bleeding with a texture of ground coffee occurs. This is sometimes accompanied by bad odour and expelled tissue matter. We advise you to visit the doctor, in such a case, to ensure all foetal matter is cleaned away from the uterus.

Brownish and, occasionally, red discharge from the vagina in the first trimester can be a sign of miscarriage if accompanied by abdominal pain, lower back pain, and strong period-like cramps. The bleeding may vary from light to heavy, have blood clots, and come and go for a few days. In most cases, a woman’s body recovers from miscarriage over a period of 1 week to 10 days. Then, further treatment is not needed.

This is another condition which is caused by increased estrogen levels and increased blood flow. Brownish discharge is one of its symptoms.

Infections of the vagina and sexually transmitted diseases can also cause brown spotting.

How to Reduce Brown Discharge When You’re Pregnant

If you are looking for tips on how to stop brown discharge during pregnancy, here’s what you can do.

Do not skip your medical appointments and complete all the recommended checkups on time so that any problem can be diagnosed and managed before it’s too late.

This refers to the toll pregnancy takes on physical and mental health. See if you can get a hired help or trusted family member to help out and reduce your workload.

While exercising and staying active is important during pregnancy, remember that too much of something is bad.

Heading to bed is the best thing you can do. Sleep for as many hours as your body needs. Try to nap during the day if you’re working.

Putting your feet up takes your weight off the floor. This helps better the blood circulation in your body and reduces the quantity of brown discharge during pregnancy.

Straining yourself by lifting heavy items isn’t a great idea.

The tests include a vaginal and cervical examination, blood tests and ultrasound scans, tests to check the size of your uterus, the levels of pregnancy hormones in your blood, the amount of bleeding and the presence of any visible factors causing the discharge and bleeding. The medication administered to treat brown discharge during pregnancy depends on the nature of the problem. Some women don’t require medication while others do.

When Is Brownish Discharge a Cause for Concern?

While there’s no need to panic in most cases, keeping track of the appearance, quantity, and odour of the brownish discharge is important.

There are some symptoms that reflect serious underlying problems:

1. A large quantity of discharge – In general, any discharge during pregnancy that needs a sanitary pad is a warning sign.

2. Discomfort – Discharge accompanied by pain and cramping, a bad odour may indicate a vaginal infection. If you experience any of these, you must consult a gynaecologist at once.

3. Watery discharge – Discharge accompanied by watery fluid or lumpy matter may signal a miscarriage and a need for a D & C.

4. Duration of discharge – Discharge which persists for more than a week after sexual intercourse or a medical examination could be a sign of an infection.

5. Fever along with discharge – Discharge accompanied by fever and chills may be a serious infection of the uterus or kidneys and should be treated at once.

6. Severe pain with discharge – Discharge accompanied by dizziness, severe pain, and abdominal cramps may be because of an ectopic pregnancy. This poses a threat to the life of the mother and will need termination.

1. How Much Brown Discharge Is Okay During Pregnancy?

2. How Long Does Brown Spotting Last During Pregnancy?

Vaginal pH fluctuations can cause minor brown discharge. This is usually not a cause for concern because it only lasts two to three days and goes away on its own.

Vaginal bleeding is one of the most common symptoms of a miscarriage. This can range from light spotting or brown discharge to an unusually heavy bleed. Light bleeding is quite common before 12 weeks of pregnancy (during your first trimester) and is not always a sign of miscarriage.

4. Can Stress Cause Brown Discharge?

Vaginal discharge is normal during pregnancy because your body produces more oestrogen, which signals the vagina to produce more discharge. When you’re pregnant, having dark or light brown discharge can be concerning. Most of the time, there’s nothing to worry about, but if you have any doubts or concerns, or feel unwell, do consult your doctor immediately.

Though brownish discharge doesn’t usually indicate a problem, always call your doctor if you notice bleeding during pregnancy. Make a note of your symptoms and visit your doctor if you suspect anything amiss. After all – it’s better to be safe than sorry.