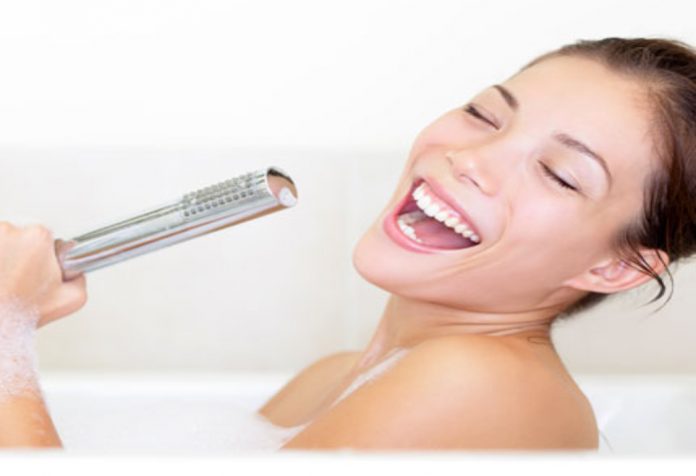 Have you never sung in front of people for fear of how you’ll sound? Well, leave that to professional singers with a knowledge of music. You can be a star by singing in the bathroom, at least, and reap the enormous health benefits of doing so.

It doesn’t matter, at least in the shower, whether you’re a talented singer or not. If you can talk, you can sing too, period! What’s more, singing in the shower can do you good.

5 Health Benefits of Singing in the Bathroom

1. It’s almost as healthy as yoga

When you sing, you naturally go into a controlled, deep breathing mode similar to practicing yoga. You exhale while humming or belting out a tune and inhale in between, resulting in a rhythmic breathing pattern. Not just yoga, singing is akin to an aerobic activity as it works your lungs, pumps more oxygen into the blood, tones abdominal and intercostal muscles, that are linked with breathing. So, ladies, the next time you’re too lazy to do a downward dog asana, sing in the shower!

2. Crooning could help you live long

Singing helps your spirit soar and relaxes you after a tiring day. But, did you know that it could help you live longer? Singing improves heart function and greatly reduces the risk of heart disease. It helps in producing higher levels of immune system proteins in the saliva too. Start your day by singing in the shower or find time to take a shower before hitting the sack at night.

3. It helps you bear pain better

Singing is definitely not the first thing that comes to your mind when you’re in pain. But, while no one’s claiming that it’ll relieve you of pain completely, it does help in channeling your mind and energy away from it. It helps release a flurry of feel-good chemicals called endorphins in the brain. The musical vibrations from songs are known to have a very soothing effect on the body too. The next time something pains, try humming your favourite song under a hot shower.

Singing in the bathroom reduces stress. It releases the hormone oxytocin that alleviates feelings of depression, loneliness, and anxiety. Whenever you have a rough day, pop into the shower and sing to wash your worries away. It could be a ballad, a pop number or a rock song; whatever it is, you’ll feel better and less worried about what stressed you out in the first place.

Not only does bathroom singing distract your mind from negative thoughts, it lends you the power to be yourself without any inhibitions. Out of the many emotional benefits of singing, increased self-awareness and self-esteem, improved focus and memory top the list. It doesn’t matter if you haven’t quite been gifted with a voice; singing in the bathroom can make you feel like you have!

Mommies, don’t shy away from being bathroom singers. Raise your voice in the shower without any fear of being judged and hum your way to a much healthier and happier life. Grab that shampoo bottle and be a rock star or croon your favourite love song to an invisible audience. You’ll love how stress-free you feel.

9 Home Remedies for Constipation in Toddlers

9 Signs That Your Baby Is Not Getting Enough Sleep