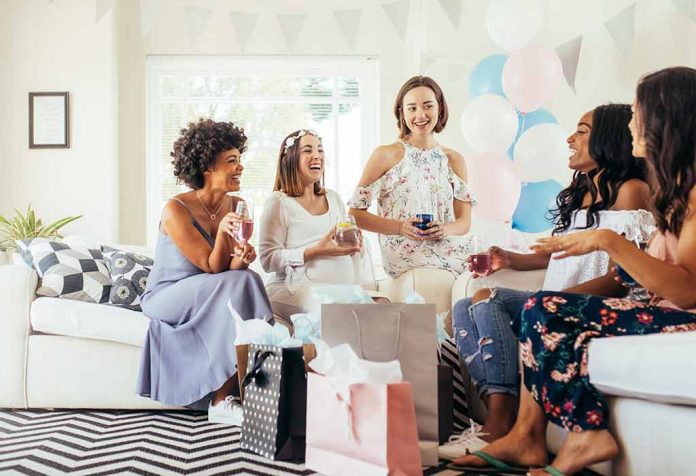 The birth of a tiny little member of the family is celebrated in all parts of the world, but there are many cultures and traditions where celebrations also happen before the baby’s birth, also commonly known as a baby shower. This special function is celebrated in different ways in different cultures, and if you are intrigued to find out some fun facts and trivia associated with baby shower; we recommend reading the following post!

Here are some interesting questions to ask at a baby shower trivia:

1. At what age babies can taste salt?

Answer: Babies can taste sweet and sour, but it is only by 3 to 4 months of age that their taste buds can recognise salt.

2. Which is the first sense a baby acquires after birth?

Answer: The sense of touch.

3. Are babies born without kneecaps?

Answer: Yes, babies are born without kneecaps. They, instead, have cartilage that later turns into bone as babies grow and develop.

4. On average, how much does it take to raise a child from birth to 17 years, in America?

Answer: It may take approximately 285,000 USD on average.

5. At what age a baby can smile socially?

Answer: Anywhere between 6 to 8 weeks after birth.

6. How many bones does a newborn baby have?

Answer: A newborn baby has 300 bones in his/her body.

7. How long does it take for the fingerprints to appear on a baby’s fingers?

Answer: Newborn babies have shallow and fine fingerprints, and they become prominent after six months of age.

8. How far can a newborn baby see?

9. Which is the colour that babies recognise first when their colour vision begins to develop?

Answer: Babies observe colour red first then other colours, and by five months of age they can see the full spectrum of colours.

11. What was the most significant attraction in Khloe Kardashian’s baby shower?

Answer: There were adorable elephant sculptors that were made of flowers.

12. Which colours were used for Ximena Duque’s baby shower?

Answer: All the decorations were done in grey and pink colours.

13. What was so special about Eva Longoria’s baby shower?

Answer: The baby shower decor was done in a bright yellow colour!

14. At what age do babies start having actual tears?

Answer: Babies start crying at birth, but babies start having tears by one month of age.

15. Which colour was associated with baby boys in the 1900s?

Answer: It was the colour pink because the concept of associating colours with genders didn’t happen back then.

16. What are disposable diapers called in South Africa?

Answer:  Disposable diapers, which are usually known as Diapers in the US and Nappy in the UK, are called Disposables in South Africa.

17. What is the actual percentage of babies who are born on their due date?

Answer: Studies reveal that about 4 to 5 per cent are actually born on the exact due date. However, approximately 80 percent are born anywhere between from 38 to 42 weeks.

18. What is the highest number of children born to a woman?

19. How many extra calories should a woman eat in the third trimester?

Answer: In the third trimester, a pregnant woman should consume approximately 500 calories over and above the regular calorie intake.

20. How long does it take for a baby to recognise/differentiate between familiar people?

Answer: By approximately 3 months of age, babies can differentiate between familiar and unfamiliar faces.

Answer: A baby is called Akachan in Japanese.

22. There is a scientific term for when a sperm and egg unite, what is it called?

Answer: It is called a zygote.

23. How long does it take for a baby’s eye colour to get fixed or permanent?

Answer: It may take up to 1 year for a baby’s eye colour to become permanent!

24. What was the birth weight of the heaviest baby born to date?

Answer: According to Guinness World Records, the heaviest baby born was 22 pounds and was delivered by Giantess Anna Bates in 1879. The boy survived only for 11 hours.

25. When can babies recognise themselves in the mirror?

Answer: Babies can begin recognising themselves anywhere from 18 months to two years of age.

26. What is the most essential ingredient required to make a ‘diaper cake’?

Answer: It is the Diapers!

27. What is the highest number of teeth a baby is ever born with?

Answer:  Sean Keaney of UK was born with 12 teeth! This record is also mentioned in the Guinness World Records.

28. What is the tentative age when babies start crawling?

Answer: Most babies start crawling anywhere between 6 to 10 months of age.

29. What can babies do that is almost impossible for the adults?

Answer: Babies can swallow and breathe at the same time.

30. What is the average amount of steps that a toddler can take in an hour?

Answer: A toddler can take approximately 2400 steps in an hour.

31. What is the proportion of a baby’s head to its body at birth?

Answer: A baby’s head is one-quarter of the size of its body at birth.

32. What is another name for a pacifier in England?

Answer: A pacifier is also known as a dummy.

33. What is forbidden or is not a done thing for a pregnant woman in Turkish tradition?

Answer: Pregnant women should avoid looking at monkeys, camels, bears, etc. and looking at pleasant things is encouraged because it can help them produce a beautiful baby.

34. At what age the baby doubles his or her birth weight?

Answer: It is around 5 months of age that a baby is usually double his birth weight.

35. What was the weight of the lightest baby ever born and survived?

Answer: Saybie was the lightest baby ever born with a birth weight of 245 grams, in the US.

36. Which is the evil mythological character that is not used in lullaby?

Answer: Lilith is the evil character that is kept at bay in lullabies because this demon was believed to steal the souls of children.

Answer: The music group was ‘The Supremes’.

38. Who usually organises or hosts baby shower for the mommy-to-be?

Answer: It is either close friends or family members.

39. What is the approximate rate of cesarean deliveries in the United States?

Answer: According to a study revealed by the Centers for Disease Control and Prevention provisional, approximately 31 percent deliveries were by cesarean.

40. How long does an average pregnancy last?

Answer: It is for approximately 40 weeks.

These are just some of the interesting facts and trivia for the parents-to-be. You can collect more such data or even use personal information or fun incidents to make the trivia questions more fun and interesting.

Why It’s Important to Stay Happy During Pregnancy

How To Teach Kids To Draw