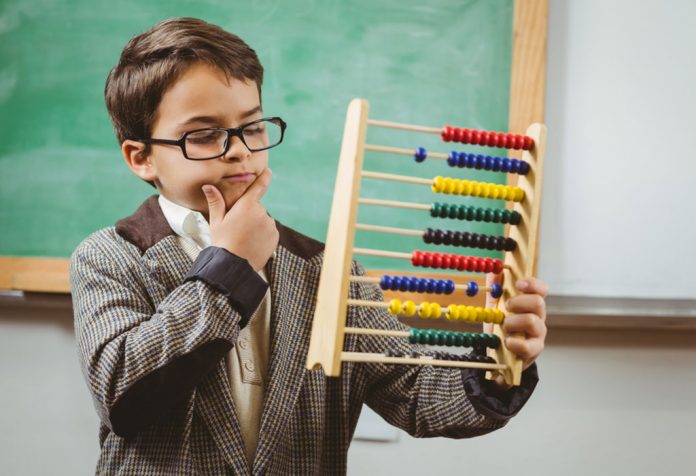 One of the most successful methods through which toddlers and children learn is touch, feel and colours. It imprints easily in their minds. Hence, objects become a convenient method to teach children. Now, imagine if such an object can be used to teach maths!

Abacus makes maths easy to comprehend and fun to learn.

The Latin word ‘abax’ from which the word abacus is derived means a flat surface or table. Today, abacus has evolved into a framed wooden object with strings of plastic or wooden beads. The ancient abacus was a flat board or tablet on which stones or shells were moved in order to calculate. It was only in Rome that a metal abacus originated similarly to what is used these days. Abacus has an origin in countries like Europe, China and Russia but its exact time of origin is unknown.

You know of the abacus as a calculating tool that was used before written numbers were invented. People wanted to communicate calculations to each other, and hence abacus was used. Though it is a vintage form of calculating, Abacus is used to introduce maths to children in the modern world.

Benefits of Abacus for Kids

Some of the benefits include:

How to Use Abacus for Children?

There are many Abacus activities one can use to train their children. These games and activities differ for each age group. However, this list of games is popular due to its lack of complications and easiness to understand.

The things you need for this are:

The ‘Match My Move’ Method Counting and Basics with Abacus

Some of the basics involved in an Abacus include:

How To Teach Addition With The Help Of Abacus

There are multiple levels of additions that can be used on an Abacus:

We need to add value to every bead. The basic ways to begin would be to give the value of one to each bead. Let’s learn this as an example.
3+2= 5. This example can be done on the abacus in this manner:

Abacus is like Vedic mathematics, it has less to do with counting and more with strategies. These strategies are the key to evolving thinking, memory and other aspects of mental ability. For advanced additions of the abacus, the following simple strategies will help:

How To Teach Subtractions With The Help Of Abacus

This is as easy as additions. In fact, easier.

It is interesting to teach children about the Indian currency with the abacus. A clear way of learning the value and the multiples of the currency. We have all been textbook learners of multiplications, that is we have mugged the whole tables! Abacus has a different approach; it shows that multiplication is nothing but the sum of a particular number twice, thrice and so on.

Use of Abacus to Teach Place Value

If we require to teach beyond the simple value and use it to make them understand place value it can be done in simple and easy manner.

How to Make An Abacus for Your Child at Home

If you would like to try making an abacus at home to go one step more and give the child an experience of craft, it could be done in five easy steps:

What Will You Need?

How To Do It

The Abacus becomes intriguing once kids and you learn the methods of playing or working on it. These methods can be worked on a simple single coloured Abacus or a two-coloured beads abacus. Remember that any activity or any game that you play with children your interest is a reflection of how much interest they will have in the same.

Benefits of Ghee – 15 Reasons to Use It Every Day

7 Interesting Facts About your Big O!