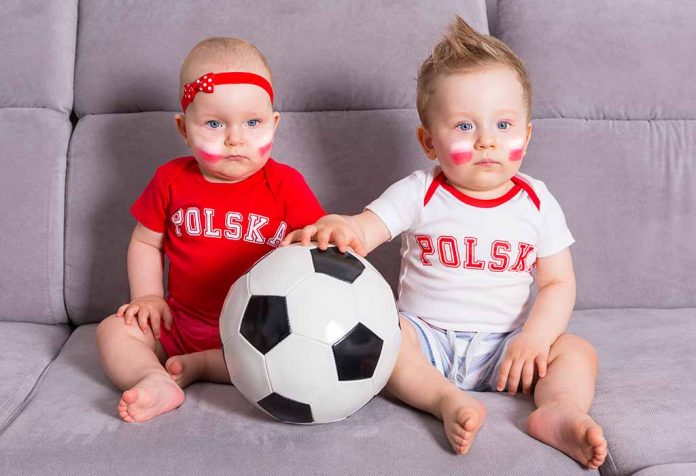 It’s a dream come true for sports-loving parents to name their child after a great athlete. Athletes are great role models, and as a result, they provide excellent baby name inspiration.

However, it’s not always easy to develop the perfect sports name for your baby. To ease your struggle, we have collected the best sports names for both boys and girls for you to choose from:

Sports Names for Boys With Meanings

Here is the list of sports names for boys with meanings inspired by some well-known sports personalities:

Barkley comes from Old English and Scottish origins and means a “birch tree meadow.” It is the name of an outstanding basketball player called Charles Barkley.

The last name of Kobe Bryant, one of the greatest basketball players, is of Gaelic origin. The name means “strong,” “noble,” or “virtuous.”

This name is popular with North Carolina basketball fans of English origin, meaning “a sovereign male ruler” or a “member of the highest grade of the British peerage.”

James is a classic name for boys of English origin, meaning “supplanter.”  It is also the last name of Lebron James, an American basketball player.

This name is popular because of Michael Jordan, one of the greatest basketball players. The name hails from Hebrew origin, meaning “to flow down” or “descend.”

Nolan is a traditional Irish name meaning “champion” or “noble.” The name became popular in sports after Nolan Ryan, the Basketball Hall of Fame moniker.

Some popular Formula 1 names for boys:

Adrian, who drove the Ferrari engine for Super, is a name of Latin origin meaning “person from Hadria,” a place of royal origin.

The name of the F1 driver, who died while warning others of a crash, means “blessed” and is of German origin.

Daniil, was the name of the second F1 driver for Toro Roso. The name is of Russian origin and means “only God is my judge.”

The name of the F1 renowned driver is of Spanish origin that means “daring.”

The name Jenson after Jenson Button is one of the youngest and successful British car racers. The name originates from Hebrew, meaning “son of Jan or God is Gracious.”

Lewis is a famous F1 driver for Mercedes. The name of English origin means “famed warrior.”

Some popular athletic names for boys:

Ali deriving from the Arabic origin name, is made famous by Muhammad Ali, the greatest boxer. The name means “supreme.”

Andre of French and Portuguese origins is a derivative of Andreas, a Greek name. The first name of the famous Canadian sprinter, Andre de Grasse, means “warrior” or “manly.”

The American sports hero, Jenner, is of English origin called “Of the Family of Jens/Jons.”

The Spanish Tennis champion, Rafael Nadal, means “God has healed” and is of Spanish and Hebrew origin.

Usain, the name made popular by Usain Bolt, the fastest man in the world, means “beautiful.”

Some popular Tennis names for boys:

Arthur is a Welsh origin name of the great tennis player who won 8 Grand slam titles. The name means “bear.”

Corrado is the name of the US Open semi-finalist. The name is of Italian origin and means “sage counselor.”

Don, the name of the tennis star who was the World no 1 champion for two years, is an Irish origin name meaning “noble” or “chief.”

The name of the three-year consecutive champion of the French open means “peaceful ruler” and is of Italian origin.

Some popular Olympic names for boys:

Armin Zoggeler is a famous luger along with being a double Olympic champion. The name is of Greek origin, meaning “defender.”

Ben, a Canadian sprinter whose name originates from Hebrew, means “son of my right hand.”

Carl, the name of the 100 meters gold medallist from the US, is a German origin name meaning “man.”

The silver medallist of 100 meters race is a Spanish origin name meaning “home-runner.”

Some popular baseball names for boys:

Bo meaning “strong and fast” of Israeli origin, is the perfect short name for a baby boy of baseball enthusiast’s parents.

Camden is a Scottish origin moniker meaning “winding valley.” The name Camden Yards, the home field of Baltimore Orioles’ is known to all baseball fans.

Gehrig, the name became popular due to Lou Gehrig. Lou Gehrig is most remembered for his farewell address at Yankee Stadium after being diagnosed with Amyotrophic Lateral Sclerosis.

Jacoby, the surname of the Boston Red Sox player Jacoby Ellsbury is a Hebrew origin name meaning “he who supplants.”

Satchel Paige, the first baseball player to be inaugurated into the Baseball Hall of Fame, made Satchel popular among sports fans.

Some popular soccer names for boys:

Achille is a Greek origin boy’s name that means “pain” is made popular after the mythological Trojan War hero Achilles. In soccer, the name is popular due to the Cameroonian player Achille Emaná.

Carson is a Scandinavian name that means “son of marsh dwellers.” Carson, formerly a surname, is best known as the quarterback of the Cincinnati Bengals, Carson Palmer.

The name Colt is a name associated with the quarterback, Colt McCoy of the Cleveland Browns. The name is of English origin and means “young horse.”

Honduran midfielder Danilo Elvis Turcios Funez currently plays for UPNFM. Danilo is the Ukrainian equivalent of Daniel, a Hebrew name that means “God is my judgment.”

This name of Old English origin means “Poega’s town.” The name is popular due to Peyton Manning of Indiana Colts. 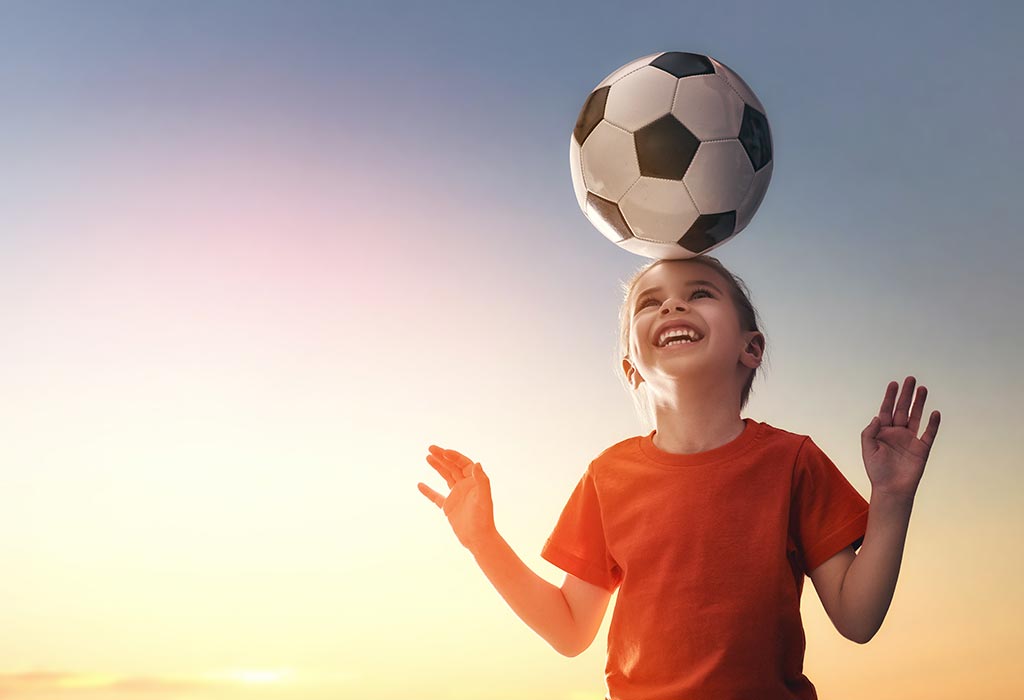 Sports Names For Girls With Meanings

Here’s a list of sports baby girl names inspired by some of the world’s most renowned female sports personalities:

Gabrielle, a French origin name, means “God is my strength.” The name is made popular by Gabrielle, a gymnast, for her performance in the 2012 Olympics.

Kallie Humphries, the Canadian Olympian, made this beautiful name popular, whose meaning is “from the forest.” The name also has a Greek origin meaning“fairest” or the “most beautiful.”

Marina, a Latin origin name derived from “marine,” means “from the sea.” It was made popular by Marina Navratilova, a great tennis player.

The famous Romanian gymnast Nadia made this name popular. The name of Russian origin means “hope.”

Ronda Rousey, the popular martial artist, made this female name popular. The moniker has Welsh and Hebrew origins and means “grand” or “loud.”

This Latin origin name meaning “strive,” was the name of Amelie Mauresmo, a tennis player who ranked number one.

This short and sweet Latin origin name is renowned for Ana Ivanovic, who won 15 career titles. The name means “favor.”

Dinara Safina, a former tennis player with number one ranking globally, made this Russian origin name popular that means “treasure.”

Maria is a Latin name that means “Star of the Sea.” The name also belongs to the famous tennis player, Maria Sharapova.

Martina is a Latin name that means “dedicated to Mars.” Martina Navratilova has 59 championships to her name.

This moniker belonged to a former Women’s National Basketball Association player. This lovely name translates as “song of joy.”

Cynthia Cooper is a retired American basketball player, widely regarded as one of the best female basketball players of all time. In Greek mythology, this lovely name is an epithet of Artemis and means “from Mount Kynthos.”

Dawn Staley, a three-time Olympian, is a basketball coach and Hall of Famer from the United States. Her name means “the first appearance of light or daybreak.”

Lisa Leslie is a former WNBA basketball player from the United States. Lisa is a diminutive of Elizabeth and meaning “pledged to God.”

Sheryl Swoopes is one of the most well-known basketball players of all time. This version of Sheryl with an “S” instead of a “C” means “darling.”

Tamika Catchings is an American basketball player who has played for the Indiana Fever and Galatasaray in Turkey. It is a Japanese girl’s name that means “people.”

Baseball players refer to their groupies as “Annie.” Annie, as a name, is one of the most upbeat variations of Ann that translates as “grace.”

Jean Faut was selected as an All-Star four times throughout her nine years in the AAGPBL. Jean is a French version of Johanna, which means “God is gracious.”

Julie Croteau is the first woman to play baseman in the men’s NCCA, a popular Latin first name derived from the Latin name Julia, meaning “youthful,” “attractive,” or “vivacious.”

The term “Pepper” refers to a pre-game workout. The American origin name refers to hot spice.

Sophie Kurys stole 201 bases in 1956, which is an AAGPBL and a global record. It is a girl’s name of Greek origin, meaning “wisdom.”

The United States Soccer Athlete of the Year, Abby Wambach, has more international goals than any other female soccer player. The name is derived from the Hebrew name Avigail, which means “my father’s joy.”

Birgit Prinz is the three-time FIFA World Player of the Year. Birgit is a Norwegian girl’s name which means the “exalted one.”

Christine Sinclair is the captain of the national women’s soccer team. Christine is a girl’s name of French and Latin origin, and its meaning is “follower of Christ.”

Homare is the nickname of one of the best female midfielders. It is a Japanese name that means “honor,” “glory,” and “renown.”

The name, Megan, was made popular by Megan Rapinoe, a soccer player. The name is of Welsh origin and means “pearl.”

Mia is one of the most well-known soccer players in the United States. The name is derived from the Slavic word Mila, which means “darling” or “beloved.”

Danica Patrick is a well-known stock car racer. It is a feminine name of Slavic origin that means “dawn star.”

Desire, a French origin name meaning “desired,” is the name of Desire Wilson, the first woman to win an F1 race.

This name of an F1 driver, Giovanna, means “the Lord is gracious,” originating from Hebrew.

Lella Lombardi is a popular F1 racer who participated in 17 races. The name is of Arabic origin and means “dark beauty.”

Michele meaning “who is like God,” is a French origin name. The name is made popular by Michele Mouton, who races for the Audi factory team.

Simona de Silvestro, a Formula E-championship racer, made this name famous. The name means “to be heard”  and is a Spanish-origin name.

So, whether you’re an F1 enthusiast or a die-hard soccer fan, now you can honor your favorite sports personality by naming your child after them.

How to Forgive Yourself and Move Ahead in Life

Chamomile Tea for Babies – Is It Safe?