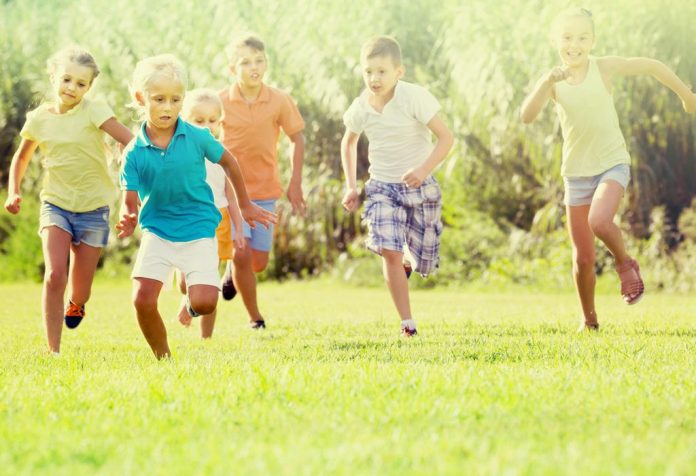 Most kids like to run naturally, but having them run around a track just for the sake of exercise takes away the fun. Therefore coming up with organized games that will let them run around is a great way to get your kids do some exercise.

Why Should You Encourage Your Child to Run?

Running is good for health and kids love it. But there are many benefits of it. Know what they are:

Here are some outdoor running games for kids that you can try:

This is a great game that works on team effort and involves plenty of running. It’s best when there are 8 or more kids and a big ground available.

Divide the children into two teams with equal players. Mark the centre of the field with several cones or other markers and plant flags of two different colours belonging to each team on opposite sides of the field such that the flags are at least 50ft from the centre. When the whistle is blown the kids rush to opposite side to grab the other team’s flag. If a player gets tagged on the opponent’s side of the field, they go to jail (a designated spot on the field away from the game). The jailed player can only be back in the game when a teammate frees them. This is quite an intensive running game and all that’s needed are pieces of paper with run-to locations written on them.

The game has to be played outdoors, preferably around large parks that have plenty of locations to choose from or in school premises. The coach or an adult supervising the game writes the names of different locations and landmarks in the vicinity such as a fountain, equipment shed, flower garden, sandpit and so on. The papers are put in a bag so that no one can see them. One kid pulls out a paper randomly and reads out the location. Then all the players have to run to the location. Once everybody reaches the location, another kid pulls out a paper and reads out the next location and everybody run there.

Take the kids out to an open field and spread out lots of individually wrapped candies on the grass. The game is to run from the starting point, find a candy and run back with it. The kids are allowed to come back with only one candy at a time and drop it at the starting line. Once they have done that, they can run back to get another candy. The kid who brings back the most candies wins the game.

The game involves the thrill of hunting packages containing puzzle pieces and finally putting together the puzzle.

A large floor puzzle containing about 40 pieces or so is put into several envelopes and placed at different distances from the base. When the whistle is blown the kids run to find and retrieve one envelope at a time back to the base. They need to run several trips to different locations to collect all the envelopes. Finally, the pieces are put together to complete the puzzle. Water games are always a fun. And, any game involving water balloons is a blast! For this one, you’ll need plenty of water balloons and a bucket to hold them.

The game is played similar to a normal relay, except, using sloshy water balloons instead of batons. The kids have to run fast while balancing the balloon, careful not to drop it. If one is dropped, they can run back to the bucket and pick up and other one and get back to the place where they dropped it to continue the run. The winning team gets one water balloon for each runner and 30 seconds to soak the losing team. Children are not physically equipped to run as far as 10 or 20km in one stretch. Therefore the distance is broken down into segments that can be achieved every day. Keep a distance log for each child and let them run as far as they can each day. As they reach levels such as 3 or 5Km, give them levels of experience like in martial arts. 2km can be a white belt, 4 km – a yellow and so on. When the marathon is complete, give them a marathon challenge T-shirt.

A fun running game where kids have to run while avoiding getting tagged.

The kids are split into two groups and start out from either side of the field. In the centre of the field is one kid who is a shark, the rest are minnows. When the whistle is blown, the minnows sprint across the field to reach the opposite side without getting tagged by the shark. If a minnow is tagged, it becomes a shark and goes after other minnows. The last minnow remaining is the winner.

Running games not only boost physical fitness levels of kids but are also fun and enriching as they learn to play as a team and adhere to rules.

Running games help kids work on their physical strength, body mobility, and endurance level; and are PERFECT for body smart-oriented kids. If you want to know more about your child’s other ‘smarts’ and make sure that his development is taking in all sense, do try FirstCry Intellikit – active learning for little ones.

Breastfeeding After a Breast Surgery