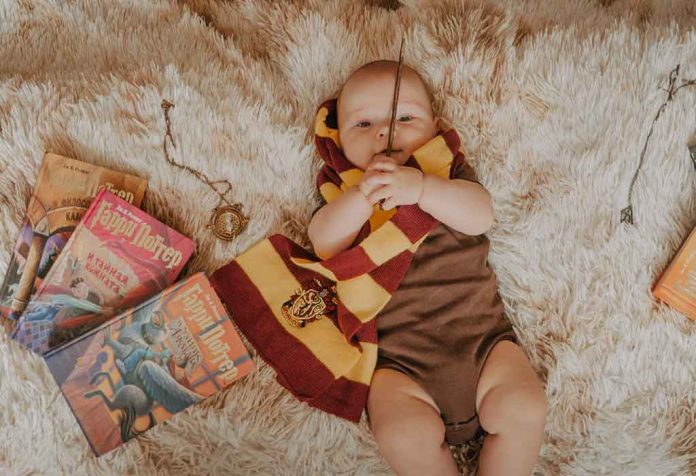 Harry Potter lovers always have several reasons to rejoice, and now here’s one more. The books and films have been a craze all over the world. Even today Harry Potter and its characters are loved and admired. The characters have names that have French, British, or Latin origin. Many of these are unique and sound witty. It is not only the name of the little wizard that we remember from the books and the films, but you can find some very cool baby names that appear in the book. Some of these are not easily recognizable but can be the right choice for your baby girl or boy. Choose from these best Harry Potter inspired baby names. Check out these fantastic names.

Here are 25 baby girl names inspired by loveable characters from the book:

It is an ever-popular name of German origin. She is Neville’s mother in the book. The name means ‘nobility.’

This English name is derived from the German name ‘Amalia.’ In the Harry Potter film, she is shown as an aunt of Susan Bones. The name means ‘work.’

It is an Italian name that is a common variation of Arianna. Derived from the name ‘Ariadne,’ it means ‘very holy.’ Ariana is the sister of Albus Dumbledore in the Harry Potter series.

A gender-neutral name from the Harry Potter series, he is one of the Weasleys in the film.

It is a French name that means ‘hardworking.’ She is a member of the Order of the Phoenix. It is an uncommon name.

It is a French name that is also popular in several English speaking countries. It means a ‘flower.’ She is portrayed as a French girl in the Triwizard Tournament in Harry Potter.

Ginny is one character from Harry Potter that draws everyone’s attention. She is the love interest of Harry Potter and goes on to become his wife.

It is a name from the Arthurian legend that means ‘the fair one.’ In the series, she is Weasley’s daughter and a bold member of the Dumbledore’s Army.

It is a Greek name derived from ‘Hermes’ meaning well-born. She is Harry Potter’s best friend, and that makes this name a favorite.

Helga means ‘holy or blessed.’ She is one of the founders of Hogwarts and plays a vital role in the story.

It is a gender-neutral name, and in the series, he is a prominent member of the Order of Phoenix.

Consider it a pet form of Katherine, and the name means ‘pure.’ She is the chaser for Gryffindor in Quidditch.

It is a Latin name that means ‘blueish.’ The name probably comes from the plant. Lavender Brown is a student along with Harry and was Ron Weasley’s girlfriend as well.

She is portrayed as the mother of Harry Potter. The meaning of this name is pure.

This Latin baby name means ‘the moon.’ It’s one of the first Harry Potter girl names to gain wide popularity. She is a quirky character in the series.

This character drew much admiration in the series. She is the mother of Ron Weasley. She comes across as a motherly figure in Harry’s life as well.

This cool name is the first name of Professor McGonagall. This Latin name is a little old fashioned, and it means ‘to remember.’

It is an Old English name that refers to a ‘flowering shrub.’ In the series, she is one of the important characters in the Chamber of Secrets.

It is a name that is derived from Margaret, and it means ‘pearl.’ In the Harry Potter series, she is the sister of Vernon Dursley.

It is a name that is been used since the middle-ages. It is a name derived from French, and it means ‘strength.’ She is a student in Slytherin in the series.

It is another gender-neutral name that you can prefer for your daughter. He is the father of Sirius in the series.

Poppy is a character in the Harry Potter series. She is the school nurse at Hogwarts.

The name refers to the Roman Goddess of plenty. In the series, Pomona Sprout is the professor of Herbology at Hogwarts.

This Anglo-Saxon name means ‘white-haired.’ In the series, she is the co-founder of Hogwarts- a fictional school of magic for students that teach witchcraft and wizardry.

She is portrayed as a student in Hufflepuff. Susan is a Hebrew name. It is a floral name that means ‘lily.’

This Hebrew name means ‘strong.’ In the series, he is Cedric Diggory’s father, who comes across as a brave and loyal man.

In mythology, he is considered a creature with a hundred eyes. In the series, he is the caretaker of Hogwarts School of Witchcraft and Wizardry.

The name is of a Greek origin that means ‘avenger or someone who never forgets.’ He is one of the most famous Aurors.

This Latin name for boys means ‘white or bright.’ In the series, he is the Headmaster of Hogwarts. He is the most lovable character from the Harry Potter series.

Arthur was the patriarch of the Weasley clan and worked at the Ministry of Magic. The name is derived from the Roman name Artorius, meaning ‘noble or courageous.’

Augustus was a famous Roman statesman. In the Harry Potter series, he is the dark wizard who is loyal to Lord Voldemort.

It is an Irish name that refers to a ‘charioteer.’ He is the keeper of the Gryffindor team in the series.

He goes to Romania to study dragons and is the eldest brother of Ron. The name is famous all across Europe and means ‘a free man.’

It is a Celtic name for boys that means ‘bounty.’ It is one of the sweet baby boy names from Harry Potter. He is the one who gives his life to keep Harry alive.

He is not a very positive character in the series. However, the name comes across as a powerful one. It means ‘dragon.’

The Harry Potter books and films made this name famous again. He is the twin brother of George Weasley and the elder brother of Ron.

This name will remain number 1 on the list. It is a strong character in the series and is a sweet name as well.

Elder to Ron and twin brother of Fred, he is a stable and friendly character in the series. It is a Greek name.

It is a classic English name with Hebrew origin. The name is derived from the name Jacob. It means ‘supplanter.’ It is the name of Harry’s father in the series.

The names come from the Latin name ‘Justinus.’ Derived from Justus, it means ‘fair or just.’ Justin is a student in Hufflepuff.

It is a Latin name that means ‘light.’ He is shown as a pureblood British wizard educated at Hogwarts and is the father of Draco Malfoy.

He is part of the trio, with the other ones being Harry and Hermione. The name means ‘advice.’ He is the most famous redhead at Hogwarts.

While he may be the ‘lunatic’ uncle to Harry Potter, the name sounds cool. It means ‘bright star.’

It is a Hungarian name that means ‘victorious.’ He is one of the students at Durmstrang.

He is a student in Slytherin in the Harry Potter series. It is derived from the Latin name Vinventius that means ‘conquering.’

It is a German name that means ‘the king.’ He is employed at the Ministry of Magic in the Magical Maintenance Department.

It is a name with an Irish origin that means ‘supplanter.’ Seamus Finnegan is with Harry in Gryffindor.

Here is another Harry Potter boy name that means ‘place of alders.’ He is the uncle of Harry Potter in the book.

It is a Greek name that means ‘the Lord has remembered.’ He is the one who is a critique of Harry Potter in the series.

These memorable and sweet Harry Potter themed baby names are perfect for you if you are a fan of the books and films. These are stellar options that everyone will love.

How to Take Care of Newborn Babies: Pointers for First Time Parents

10 Surprising Uses of Breastmilk Besides Breastfeeding