23 Must Know Facts About Space for Kids

23 Must Know Facts About Space for Kids 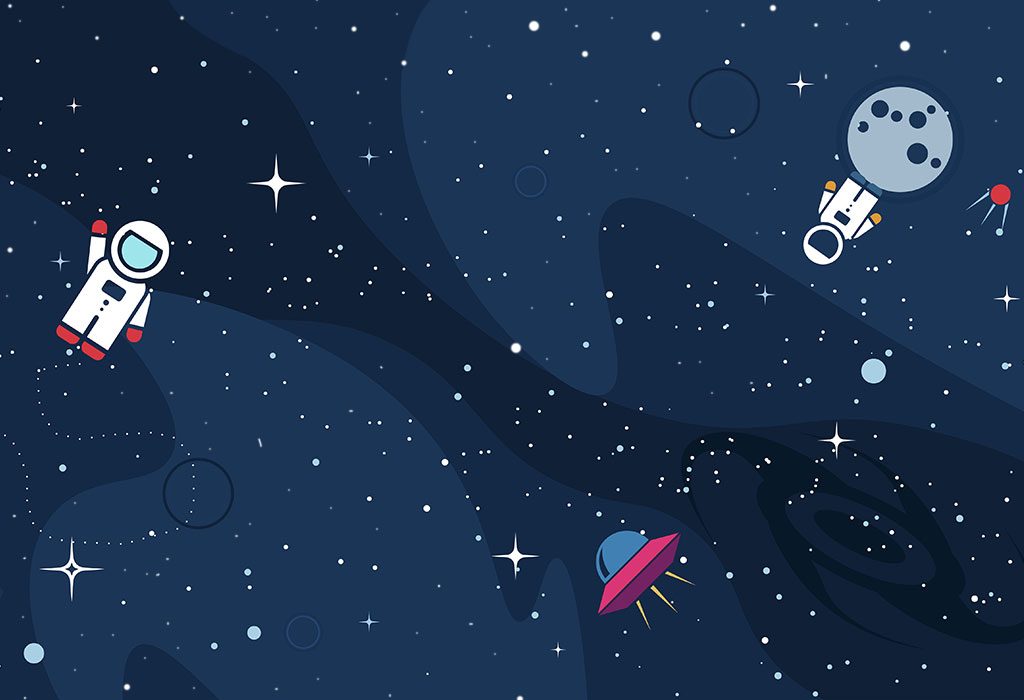 Space is a term that is wrapped in mystery, magic, and adventure. There are billions of galaxies in space, and those galaxies contain billions of stars and planets! Just imagining all the possibilities hidden away in the far corners of the universe is a difficult feat for the human brain!

In this article, we’ve gathered a list of 23 interesting facts about space for kids, which can serve as a starter guide to the wonders of space. Read on and enjoy!

Fun Facts and Information About Space for Children

Ever thought about the Sun, stars, moon, or asteroids and felt that it never made sense? Fret not; we’ve got you covered! Here are 23 interesting facts about space for kids that will leave you mesmerised by the universe’s wonders.

1. The Largest Asteroid Is About 965 Km Wide

Ceres, the dwarf planet, was the first and biggest object ever to be deemed an asteroid. It was discovered by Giuseppe Piazzi, an Italian astronomer, in 1801. Located in the asteroid belt between Mars and Jupiter, Ceres accounts for a whopping 33% of the entire belt’s mass!

2. There Are Tire Tracks on the Moon

There’s no wind or weather on the moon due to the absence of an atmosphere. This, in turn, means there is no erosion of mankind’s tracks and prints, which still mark the lunar surface! To prove this, NASA’s Lunar Reconnaissance Orbiter (LRO) sent back images of the still-noticeable tracks from five Apollo landing sites. It will take more than a million Earth-sized planets to fill up the Sun! Not just that, but the Sun is considered approximately 3,00,000 times larger than the Earth and is 14.9 billion km away. And, did you know it has been forecasted that there will come a day when the Earth will be consumed by the Sun?

The first man-made object to enter space was launched by a Russian satellite. On November 3, 1957, the USSR launched ‘Sputnik 2’, with a homeless dog named Laika in it. Laika was the first dog to enter space but unfortunately passed away in orbit, since the satellite couldn’t make it back to Earth.

5. This Is Why the Moon Glows and Follows Us

Additionally, when we’re moving along, say in a car, our brains automatically start to compare the distant moon to the cluttered foreground sweeping past us. We cannot see the moon’s angle change. We also don’t see it from the front, then the side, and the back. Meanwhile, because the moon and stars are very far away, they look like they’re staying in one spot, and it can seem to us as if these space objects are moving right along with us.

Do you love spaghetti? Well, that’s what any human will turn into once he lands inside a black hole! ‘Spaghettification’ is when you’re literally, we quote, “pulled and ripped apart” by gravitational forces when landing inside a black hole. This makes it impossible for life to survive in black holes.

The Earth rotates on an invisible axis as it orbits around the Sun, just like the other planets in our solar system. The Earth takes 24 hours to make one complete rotation, which is why one day is 24 hours long! Day and night occur depending on which side of the Earth faces the Sun. The side of the Earth that faces the Sun experiences daytime, while the other side has nighttime.

8. There Are Eight Planets, Not Nine 9. There Are Scars on the Moon

The Earth and the moon have both been hit by asteroids or meteors many times through their 4.5 billion year history. But why is it that the Moon has more craters than the Earth? Well, this is because the Earth undergoes numerous processes like tsunamis, erosions, earthquakes, and volcanic eruptions, which can erase all evidence of past impacts. The Moon has no such erosion as it has no atmosphere and hence has nothing that can keep its surface crater-free!

10. The Moon Is the Reason Behind Two Tides Each Day

11. Neil Armstrong Was the First Person to Walk on the Moon

Neil Armstrong was the first man ever to touch the moon’s surface and walk on it when he and his crew landed on the moon in 1969. The boot prints from his feet on the ground are still there! The only way to wipe off his footprints (and other astronauts’) is if another space body hits and demarcates the moon’s surface.

12. There Is a Difference Between Meteoroid, Meteorite, and Meteor

Black holes are portions of space where no light or particulate matter can escape. This phenomenon is due to the intense gravitational pull of these so-called ‘black holes’, which makes it impossible for even light rays or electromagnetic radiations to pass through. Scientists can’t directly spot black holes with telescopes used to detect different forms of electromagnetic radiation, but they can deduce the presence of black holes by detecting their effect on nearby matter. 14. A Space Probe Will Take 2 Million Years to Reach a Star

One of the most amazing space facts is about the Pioneer spacecraft that was sent to a star in space called the Aldebaran back in 1972. NASA scientists discovered signs of this spacecraft again in 2003. What makes this discovery astounding is the fact that it usually takes 2 million years to reach Aldebaran! Strange, isn’t it?

15. Over 90% of the Universe Is Still Undiscovered

The depths of the universe are still a mystery to us, as 96% of its total mass remains yet unknown. Over 80% of the matter in the universe, which is unseen, is referred to as ‘dark matter’, and is theorised to be made from undiscovered subatomic particles.

The Milky Way is the galaxy in which our solar system is located. Just like the Earth revolves around the Sun, the Sun itself revolves around the centre of the Milky Way. Our galaxy is a part of the Local Group of galaxies, is also moving, and is considered to be moving at approximately 600 km/s or 2.2 million km/hr!

Two planets, Neptune and Uranus, cannot be seen with the naked eye! You’ll need a good telescope to see them in the night sky. But now, you may be wondering, how did early scientists and astronomers identify them without telescopes? Well, they didn’t. Arithmetic calculations and observations contributed to their existence!

Stars are huge balls of hot gases (such as mixtures of hydrogen and helium) held together by their own gravity and glow in space. The larger a star, the shorter is its life – although all but the enormous stars can live for billions of years! 19. There’s a Planetoid Similar to the Earth

Sedna is an asteroid called a planetoid because it shares similar physical features with the Earth. It is, however, considered a dwarf planet. One year on Sedna is equal to 10,500 years on Earth!

20. You Can’t Hear Naturally in Space

Space is completely silent. There’s no atmosphere in it, so sound waves can’t travel without a medium. Radios are used for communications, as radio waves are transmittable in space.

21. There Is a Possibility of Life on Mars

In 1986, NASA found what they assumed to be the fossils of microscopic living beings in a rock. This led to the belief that there may be life on Mars!

Scientists estimate that there are approximately 500,000 pieces of space junk orbiting the Earth. The space junk includes items like spanners dropped during the construction of the International Space Station and fragments from rockets and satellites. These are human-made objects that are no longer useful.

23. Yuri Gagarin Was the First Human to Journey Into Outer Space

It must have been scary to be the first person to enter space, ever! Yuri Gagarin was from Russia and was the first human to journey into outer space. He circled the Earth for 108 minutes!

Here’s a bonus space fact – Venus is the hottest planet in the universe, with a recorded surface temperature of 450 degrees Celsius! What’s interesting about this is that Venus is not the closest planet to the Sun. Mercury is closer, but as there is no atmosphere to regulate temperature on Mercury, it has very large temperature fluctuations.

These interesting facts on space will leave your kid spellbound and significantly add to his knowledge! But, for his all-around development, you’ll need something more. Try FirstCry’s Intellikit, a learning program based on the theory of multiple intelligence, by which you can assist in your child’s overall development through play.

If you’ve enjoyed these fun facts, we’d love to hear from you about similar facts or tales of the universe that you know!