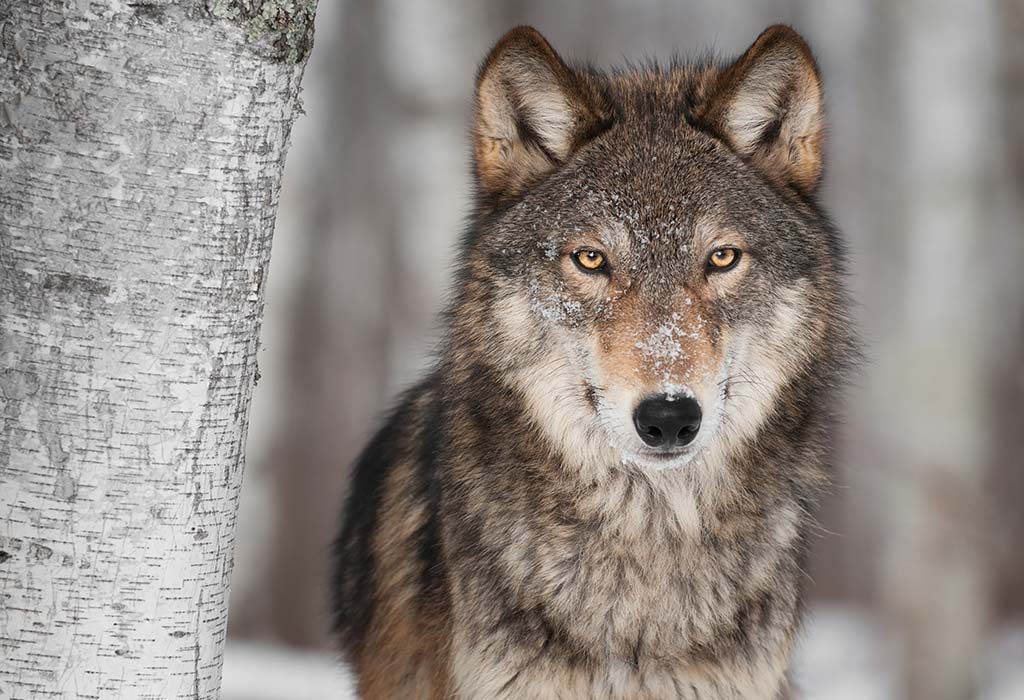 Kids learn about wolves by watching animated Hollywood movies and some TV commercials. The characteristic howling of this animal on a full moon night is what makes it so charming to watch. The fun fact is that they are mammals, which means that these wild animals have fur and feed their offspring milk too.

There are various kinds of wolves out there and if your child is wolf-curious, just read this article to learn more.

Whether it’s a snow wolf, red wolf, white wolf, or any other type, here are some interesting facts about them that are worth sharing with your kids:

One of the many arctic wolf facts for kids is that they can weigh up to 80 kg! Generally, the average weight of wolves is 40 kg; the more far away they go from the equator, the heavier they get. In north America, the largest wolf that was killed was 75 kg. In addition, wolf packs are led by an alpha male from the herd, and usually, these packs consist of about six to ten wolves.

2. They Show No Mercy

Unlike in the movies, one of the interesting grey wolf facts for kids is that they show no mercy and don’t wait for their prey to move. They attack in groups in a coordinated manner and have specific signals and ways of communicating. Once they do attack, unlike other animals they tear their prey instantly and eat them alive. They never wait for their prey to die and no special tricks are involved in killing them. It’s just a one-sided slaughter.

Wolves are true carnivores to their core. They mostly eat large or medium hoofed animals but they also eat lizards, insectivores, reptiles, snakes, birds, rodents, and foxes. The alpha male and female of the group feed first and then the other members of the pack follow. They have razor sharp teeth which makes tearing down animals and clawing through the meat a lot easier. Also, wolves are known to care for their offspring and feed their pups what they hunt too. Some of them have been spotted eating fish too.

Wolves are very adaptive to different terrains and environments, but generally speaking, they are known to live in forests, deserts, grasslands, towns, and sometimes in the outskirts of cities.

5. They are Friendly Too

Wolves get aggressive only when they’re on their hunting spree – some species are very kind and gentle too. Siberian huskies (a relative of the wolf), for example, are domesticated by humans and kept as pets. 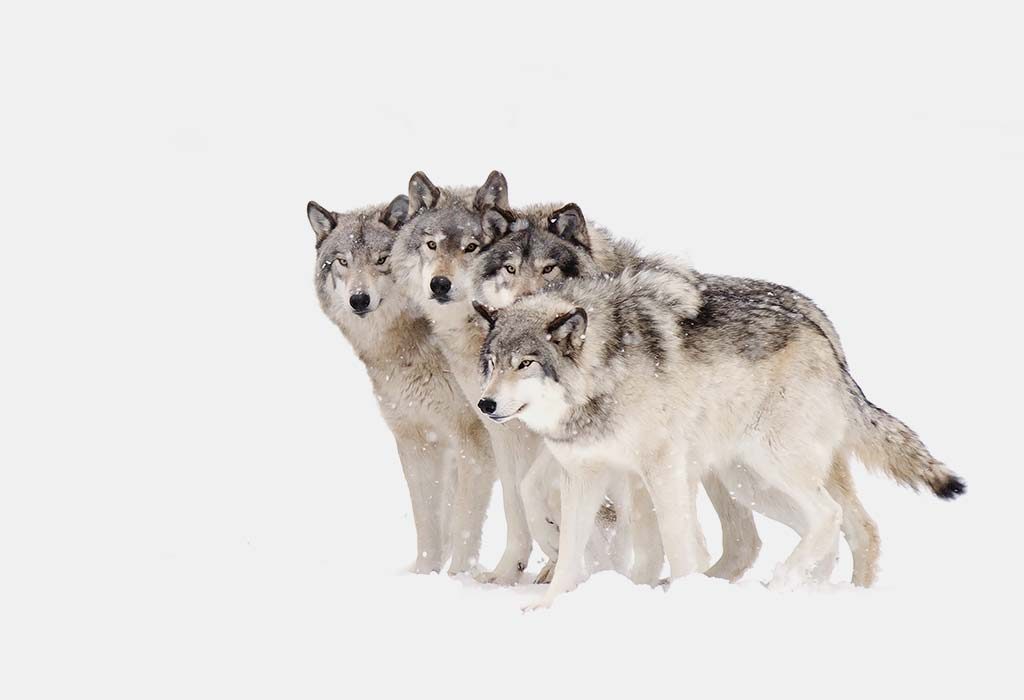 Wolves can run for many miles over the course of a day averaging at 5 mph. But when it comes to short distances, they can run up to speeds of 35 mph!

7. They Eat What They Get

There’s a reason wolves devour their prey immediately without mercy when they find them in sight. It’s because sometimes they have to go without food for days. Wolves aren’t picky eaters and usually eat whatever they get in front of them. Sometimes when they don’t get prey, they resort to eating livestock to compensate.

The average wolf will eat up to 2.5 pounds of meat, but during the breeding season, this number will go up to 5 pounds a day.

Most wolves live as long as 17 years. Grey wolves are known to have an average lifespan between six and eight years.

Real life wolves don’t morph into werewolves or become humanised. The truth is, adult wolves stand up to 1.8 meters tall and the species that live in the north are usually bigger than the wolves in the south. At the shoulder height, they measure between 26 to 38 inches, and the colour of their fur varies between grey, white, red, black, or a combination of either of these. 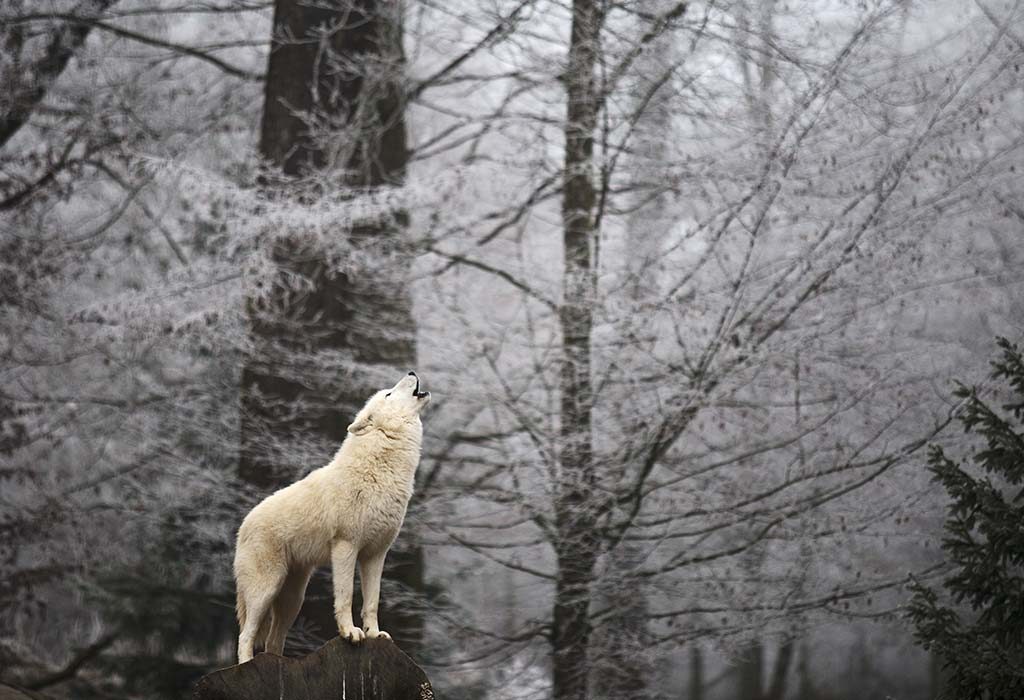 11. They Can Protect Themselves

Since wolves always travel in a pack, they can protect themselves when an enemy tries hunting them. They have a keen sense of smell, sharp eyesight, and exceptional hearing ability. Since they run very fast, they can outmanoeuvre their enemies quickly, and they have tremendous amounts of stamina too.

12. Why They are an Endangered Species

Wolves are at the top of the food chain in the animal kingdom and the only species capable of hunting them down are humans. Loss of habitats through environmental pollution, industrial growth, and natural disasters are some of the reasons why they are becoming an endangered species these days.

Guard and undercoat refer to the two kinds of hair wolves have. They shed hair in the spring and the summer in “sheets” unlike other animals.

15. They Can Smell From Miles Away

A wolf’s sense of smell is known to be 100 times stronger than that of humans. 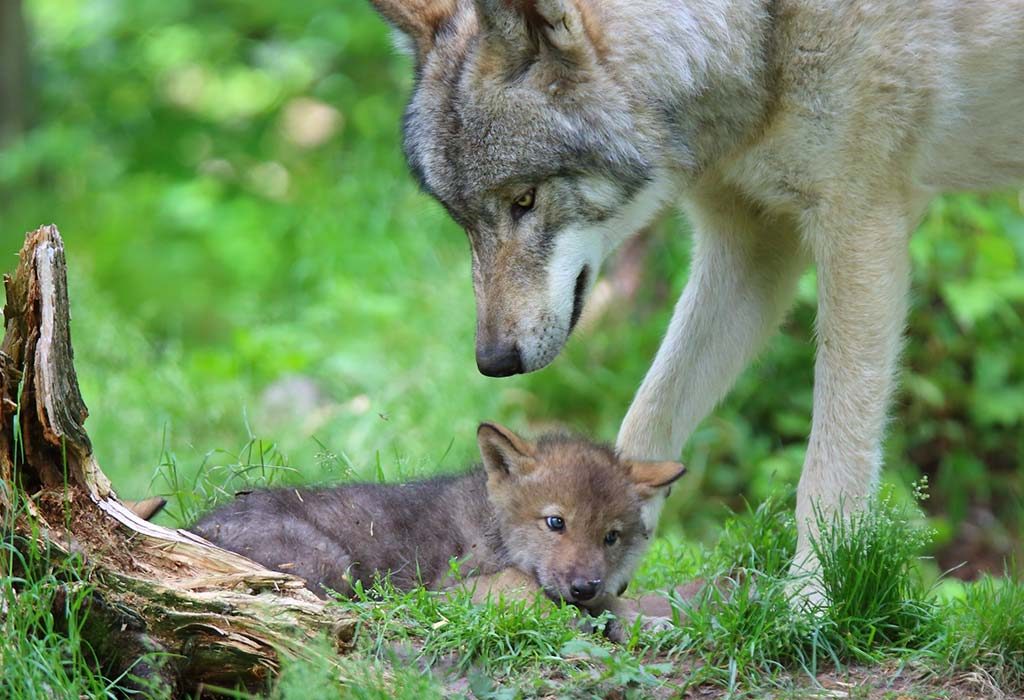 16. The Largest of the Canidae Family

They’re the largest member hailing from the Canidae family. Their origin traces back to the coyote’s evolution which dates back 500,000 years.

17. Their Territories are Different

Wolf packs have different territories, each varying depending on the geographic location.

Wolves have very large feet, starting out at 4 inches wide and 5 inches long. Their ears are pointy and well-rounded, and they have a total of 42 teeth.

19. They Can Track By Scent

Wolfs identity their territories through scent and attack any enemies or trespassers who are passing their grounds.

In the U.S., the territory size of an average wolf pack is around 25 to 150 square miles while in the Alaskan or Canadian wilderness, it goes up to between 300 to 1,000 square miles.

And that’s it. We hope you’ve enjoyed these interesting facts about wolves for kids. Read this out before bedtime and let your child get smarter and go wild with amazement!