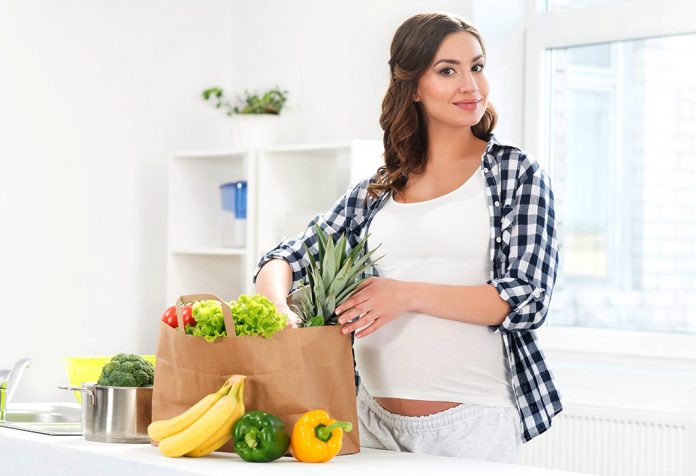 The journey of motherhood starts with pregnancy. It is crucial for a pregnant woman to have a balanced and nutritious diet with lots of fruits and vegetables. However, certain foods like papaya, pineapple, crabs, eggs, mercury-rich fish, etc. shouldn’t be consumed. That’s because these food items can trigger a miscarriage, especially during the first trimester of pregnancy. Therefore, it is essential to avoid specific foods during pregnancy to prevent a miscarriage. And, in this article, we will discuss some of them. Read on to know more.

Video: 12 Foods That Can Cause Miscarriage in Early Pregnancy

Foods That Can Cause Miscarriage in Early Pregnancy

Pregnancy brings with it morning sickness, nausea, and food cravings too. Several women know what expectant mothers should eat and what they should avoid for the health of the little life growing inside them. Although we recommend you should be careful about what you consume through the pregnancy, here, we shall share some foods that you should specifically avoid during the first trimester to prevent a miscarriage. Let’s take a look at them. 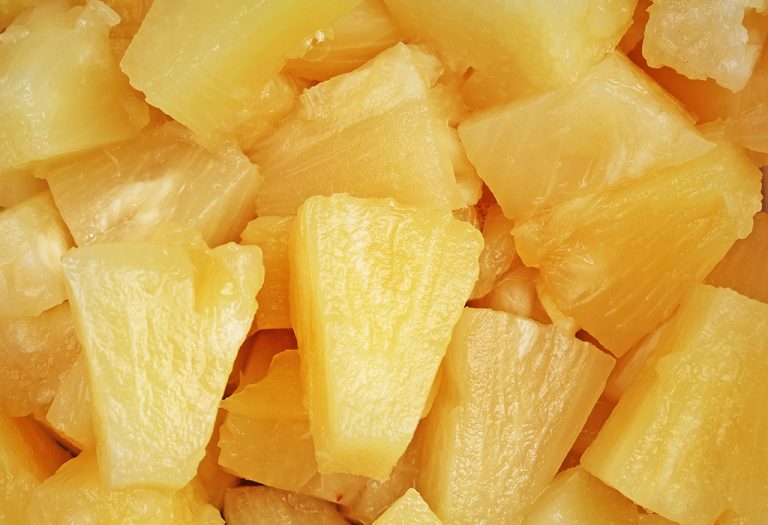 Pineapple contains bromelain, which softens the cervix and starts untimely labour contractions, resulting in a miscarriage. Pregnant women can take moderate amounts of pineapples during the early stages of pregnancy. When pineapple is consumed in heavy amounts (7 to 10 whole fruits), it might cause bleeding. Remember to consult your medical practitioner for more queries. 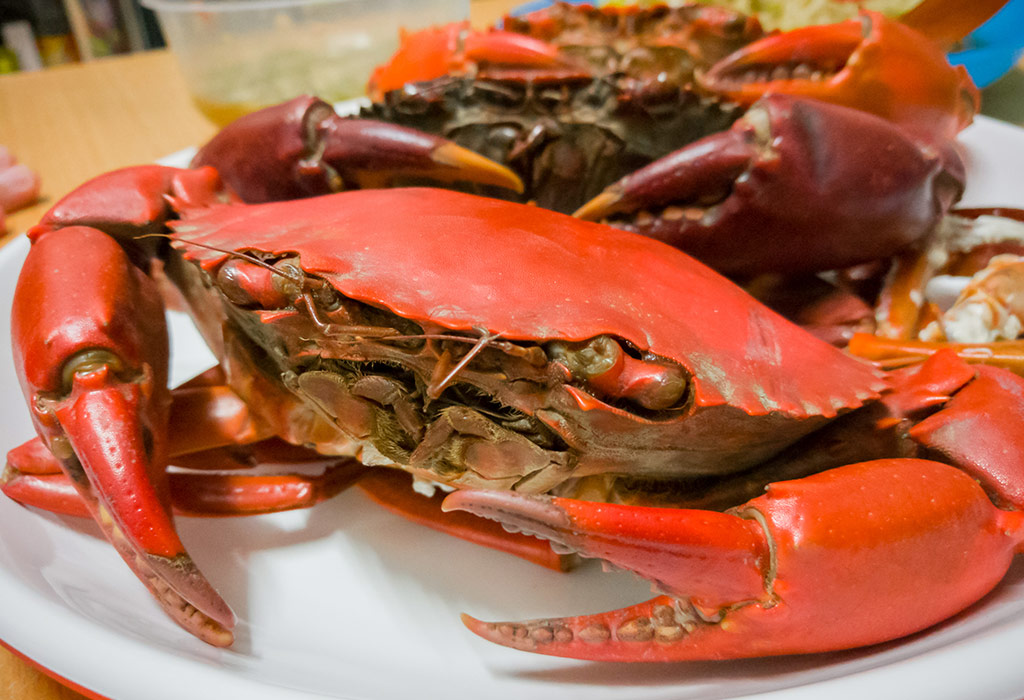 Although crabs are a rich source of calcium, they also contain high levels of cholesterol. This can cause shrinkage of the uterus and lead to internal bleeding and miscarriage. Therefore, it’s sensible to refrain from eating it during pregnancy. 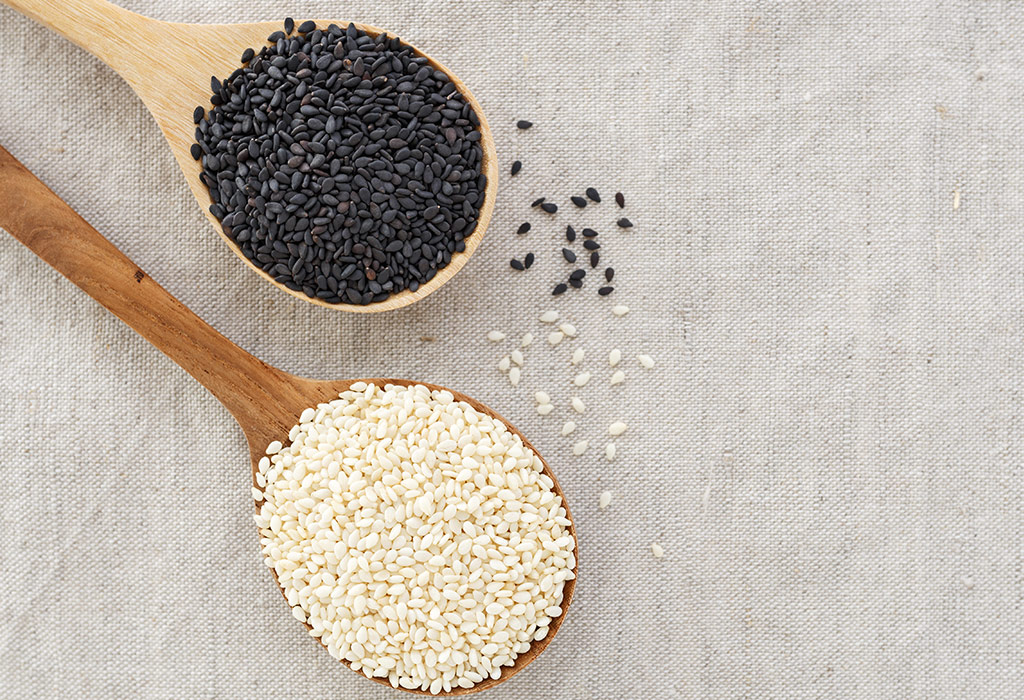 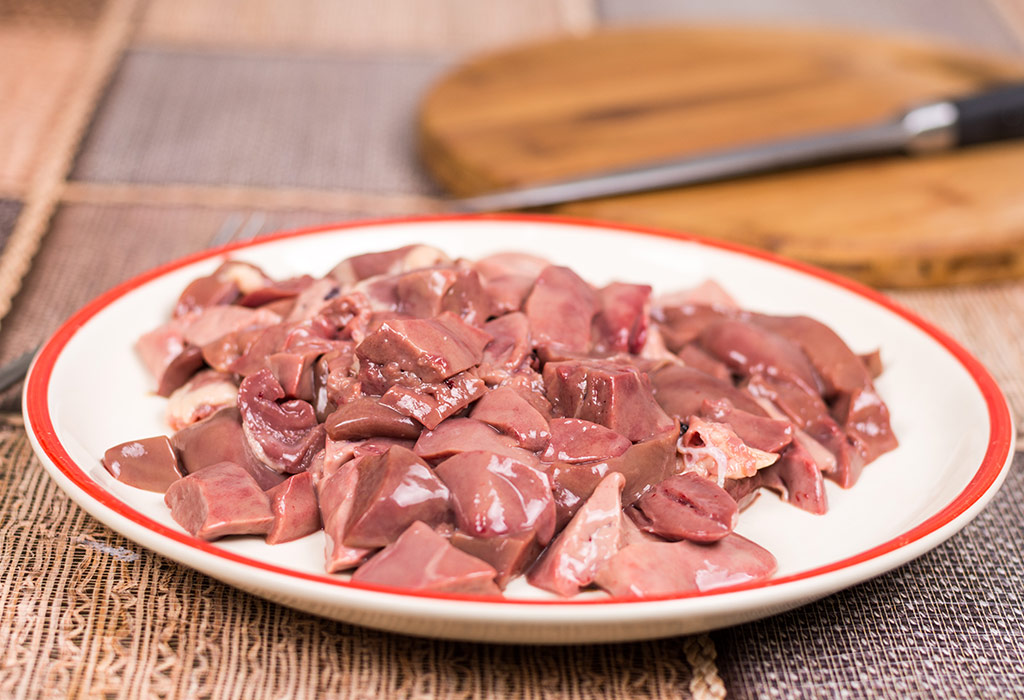 Animal liver is full of vitamin A. So, having it twice a month is not that harmful and does not cause miscarriage. But, if consumed in large quantities by pregnant women, it promotes a gradual accumulation of retinol which may adversely affect the baby’s health. 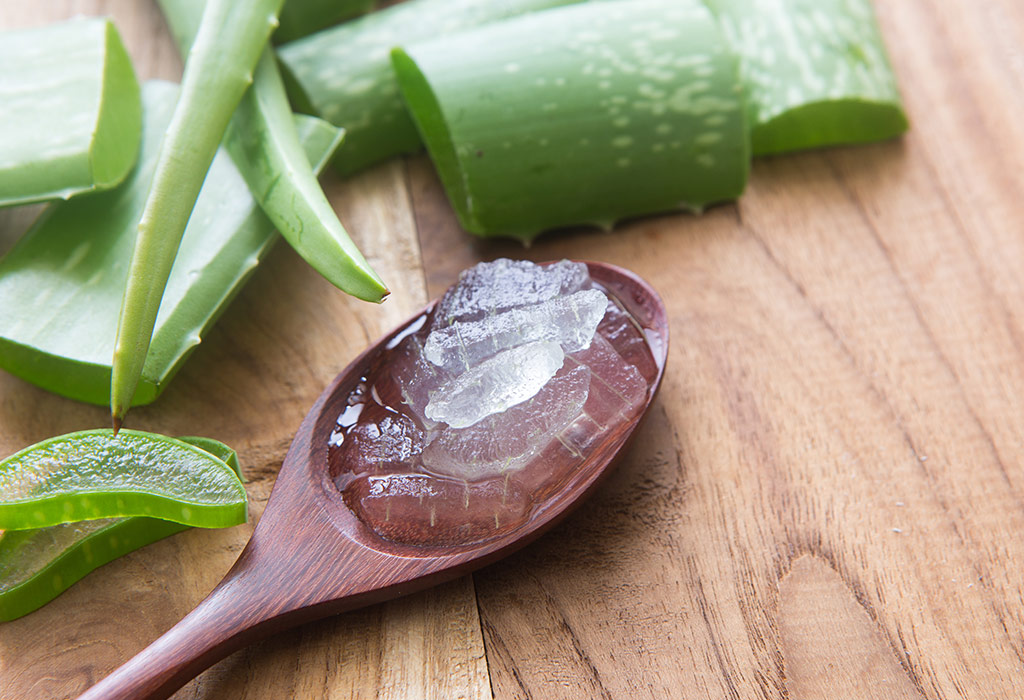 Aloe vera is known for its numerous health benefits. There are instances of pregnant women deliberately eating aloe vera during pregnancy. This is a wrong thing to do as aloe vera comprises of anthraquinones, a kind of laxative that induces contractions of the uterus and pelvic bleeding. This, in turn, leads to a miscarriage. That said, aloe vera gel, when applied to the face, is not unsafe during pregnancy. 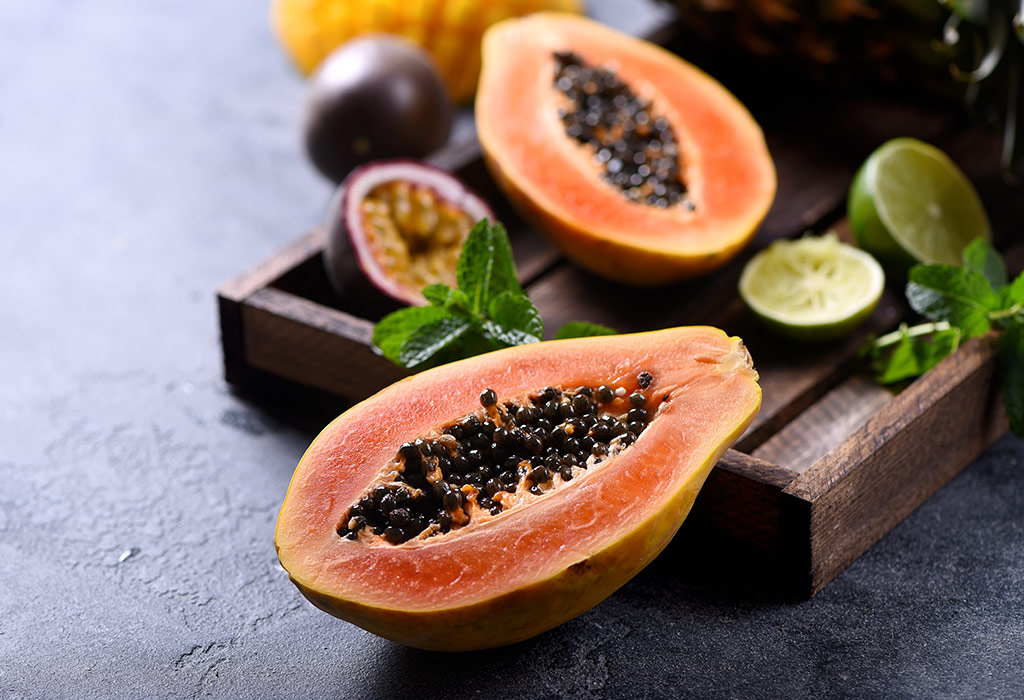 Unripe papayas and green papayas have components that act as laxatives and bring on premature labour. Papaya seeds are also rich in enzymes that cause contraction of the uterus, resulting in a miscarriage. 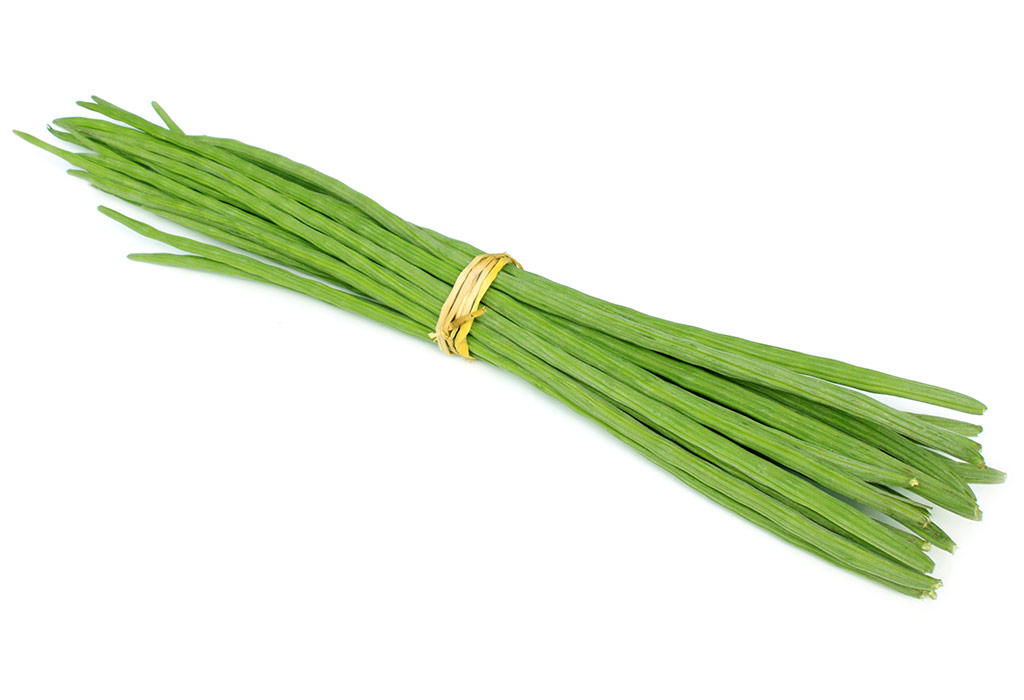 Women need to exercise caution while consuming drumstick during pregnancy. It comprises alpha-sitosterol, which is detrimental to pregnancy. As drumstick is rich in iron, potassium and vitamins, it can be eaten in limited quantity. 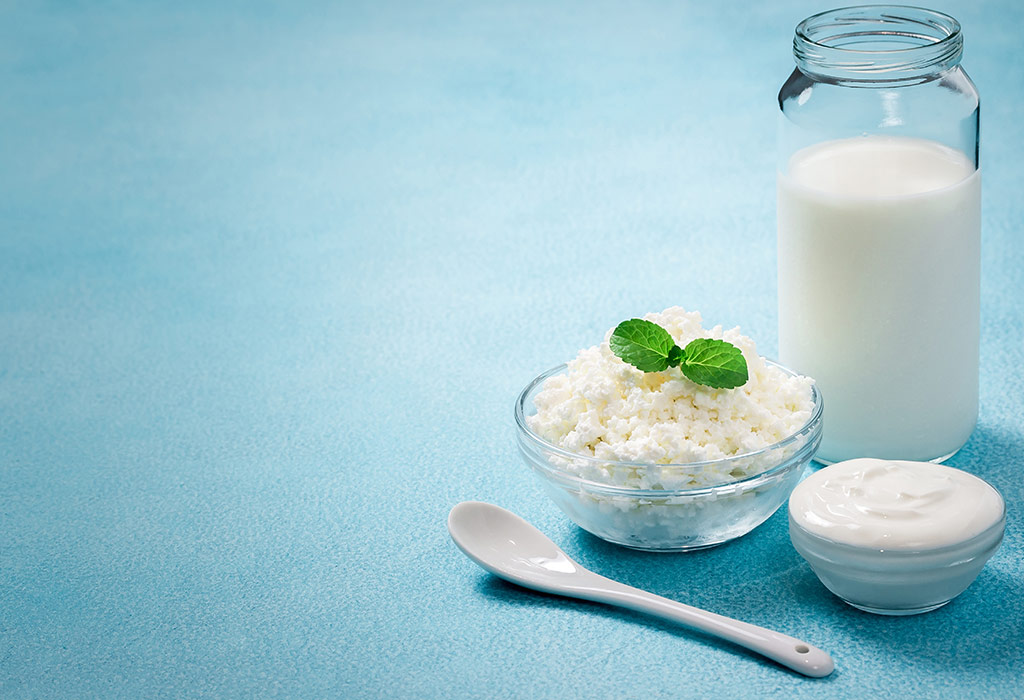 Unpasteurised milk and gorgonzola, mozzarella, feta, and brie varieties of cheese possess disease-carrying bacteria like Listeria monocytogenes, which can be harmful to the pregnancy. Consuming such dairy products can lead to pregnancy complications. 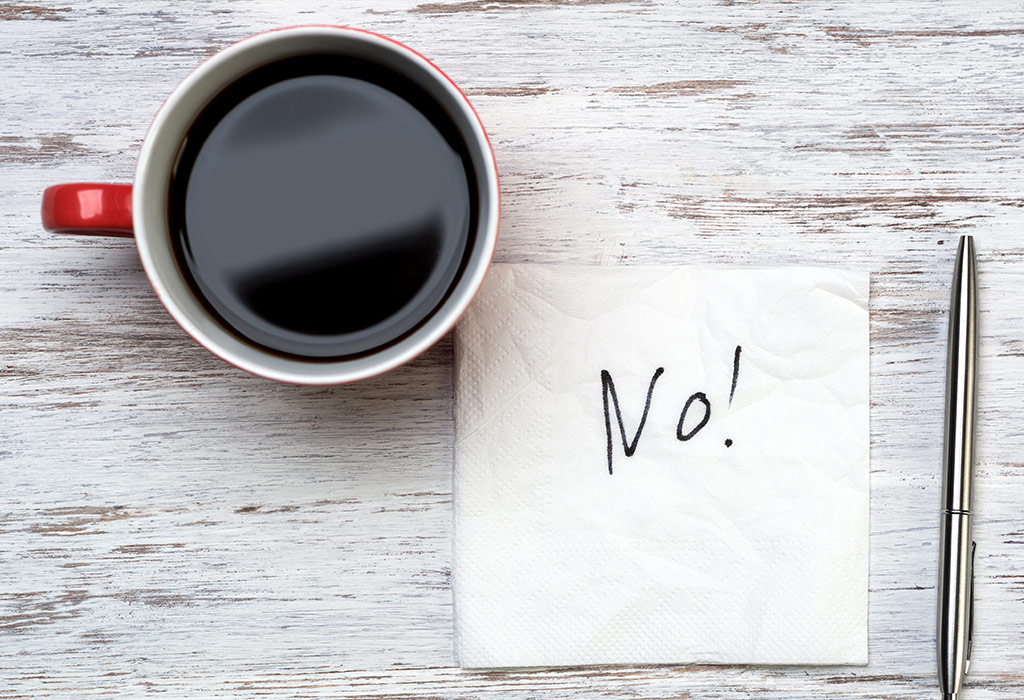 According to research, caffeine, when consumed in moderation, is quite safe during pregnancy. Still, it is advisable for pregnant women to observe some restraint, as increased levels of caffeine during pregnancy can lead to a miscarriage or an underweight baby. Moreover, caffeine has a mild diuretic effect, so it should be consumed in limited quantities. Caffeine is not only present in coffee, but also in tea, chocolates and some energy drinks. 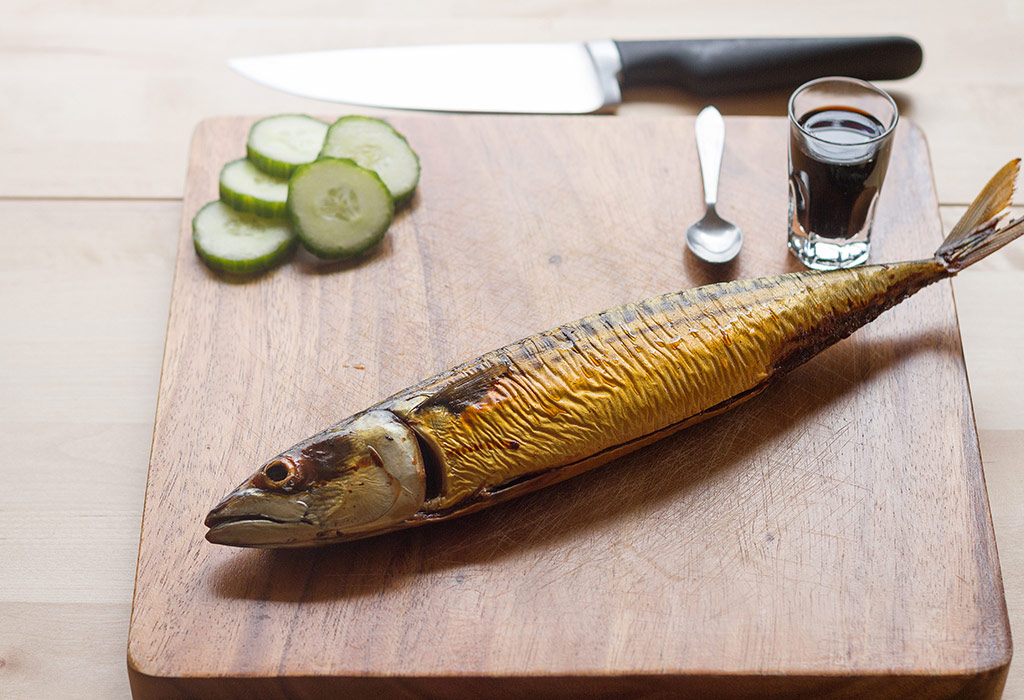 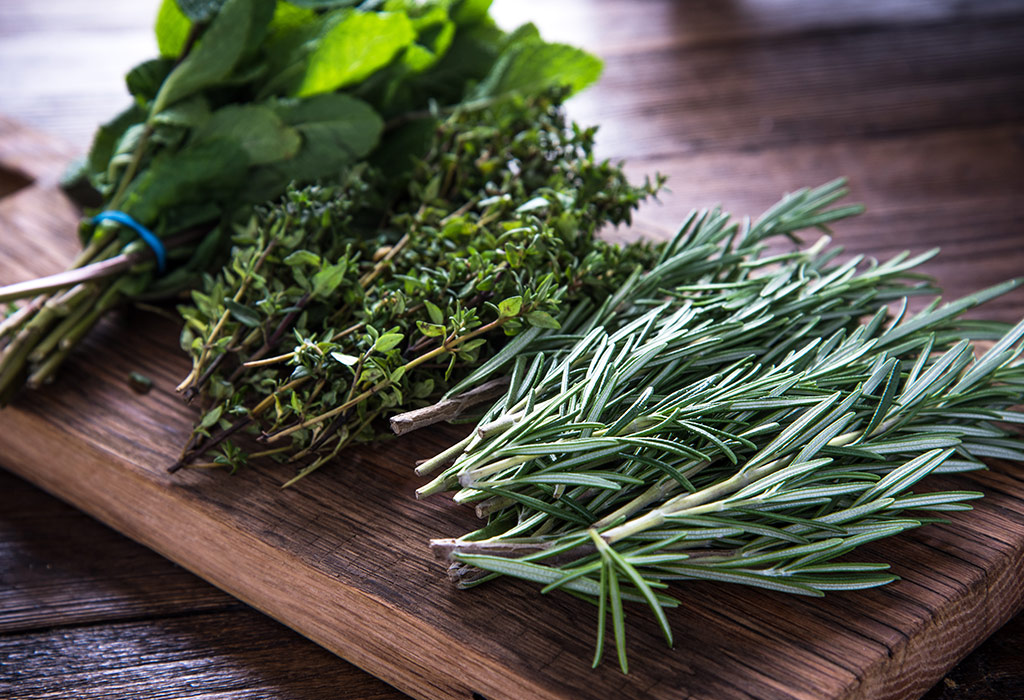 Most experts advise against taking herbs during pregnancy. Herbs containing steroids can adversely affect the baby’s growth during pregnancy. For example, Centella can cause harm to the liver, resulting in severe jaundice and damage the baby’s brain. Dong Quai contains agents that can initiate a miscarriage or premature delivery. It’s sensible to consult a doctor before consuming any herbs. 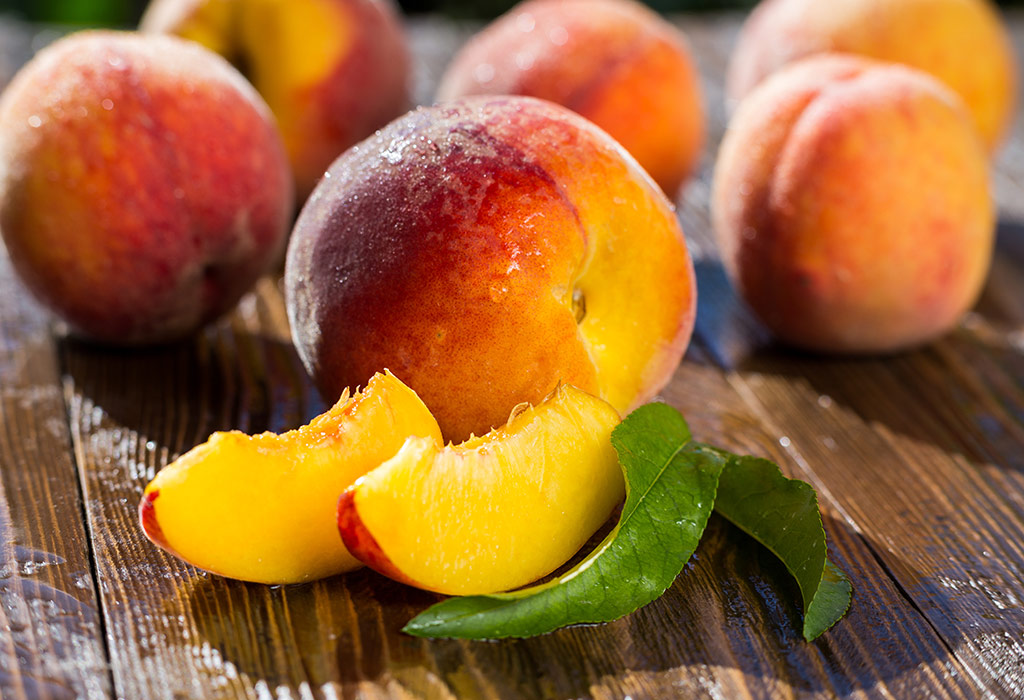 Peaches, if consumed in large quantities during pregnancy, can produce excessive heat in the body and lead to internal bleeding. Moreover, pregnant women should peel the skin off the peach before eating as the hair on the fruit can cause burning and itching in the throat. 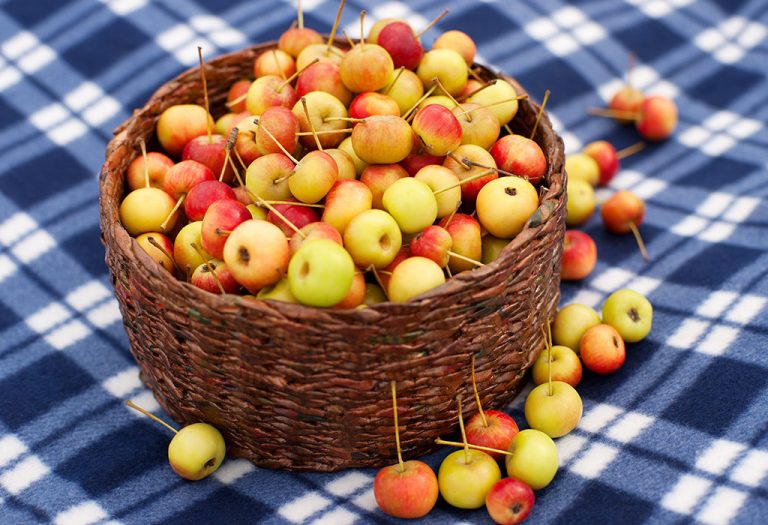 Pregnant women should avoid having wild apples during pregnancy. Their acidic and sour properties may induce the uterus to contract and lead to premature labour or a miscarriage. 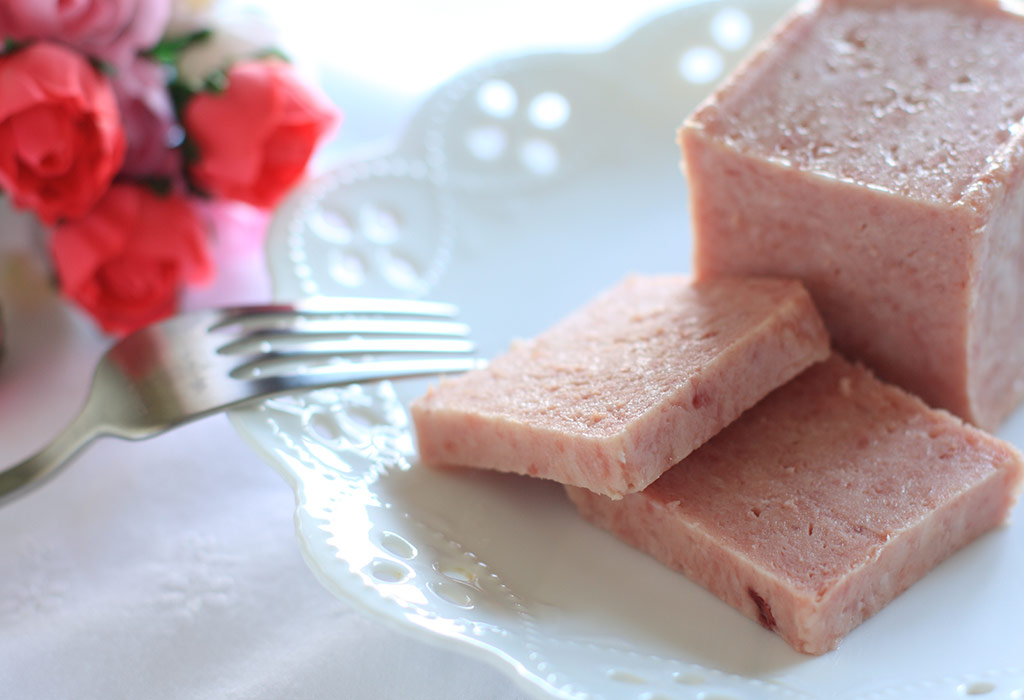 Consuming processed meats like sausages, stuffed meat, pate, minced meat, salami, deli meat, and pepperoni during pregnancy is deemed unsafe. This is because these meats harbour bacteria like Toxoplasma gondii, listeria or salmonella, which can cause food poisoning. Pregnant women should particularly avoid eating undercooked or raw meat because the bacteria present can cause severe problems like miscarriage, premature delivery or stillbirth. Therefore, it’s essential to cook the meat properly and rewarm it thoroughly before consuming. 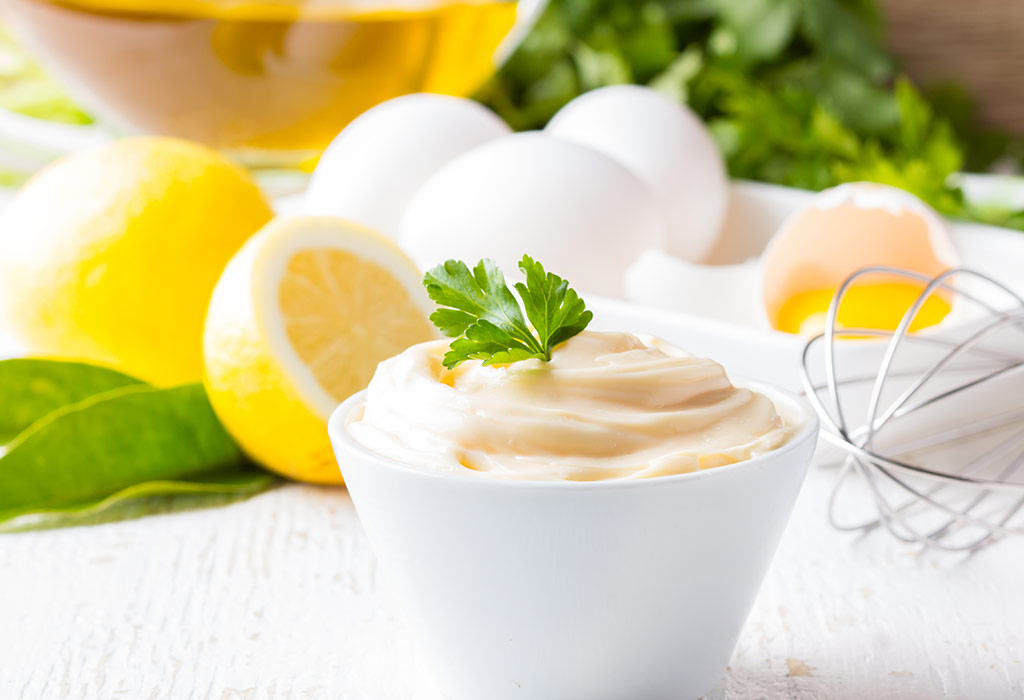 Care should be taken while consuming eggs and poultry products during pregnancy. That’s because eggs carry the salmonella bacteria that can lead to problems like food poisoning, diarrhoea, fever, intestinal pain and even a miscarriage. Cook the eggs thoroughly until the whites and yolk become solid. This helps in killing the bacteria and makes it safe to consume. Pregnant women should also refrain from having eggnog, homemade mayonnaise, mousse, soufflé, and smoothies containing raw eggs. 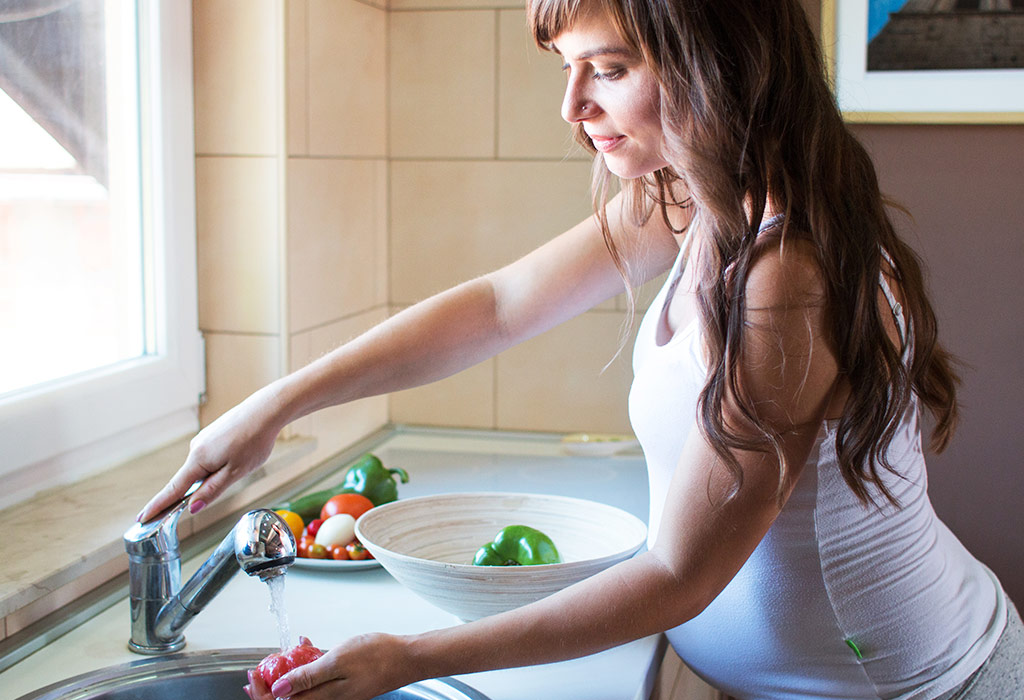 Green leafy vegetables are beneficial for pregnant women. But raw or unwashed vegetables possess toxoplasma gondii, a common parasite which causes toxoplasmosis. A pregnant woman, if infected, can pass it to her unborn child. It is, therefore, imperative to soak vegetables in clean salt water and wash them beneath running water before consuming. Pregnant women should rinse, peel and cook the vegetables well. Also, ensure that the used cutlery has been washed and wiped clean. 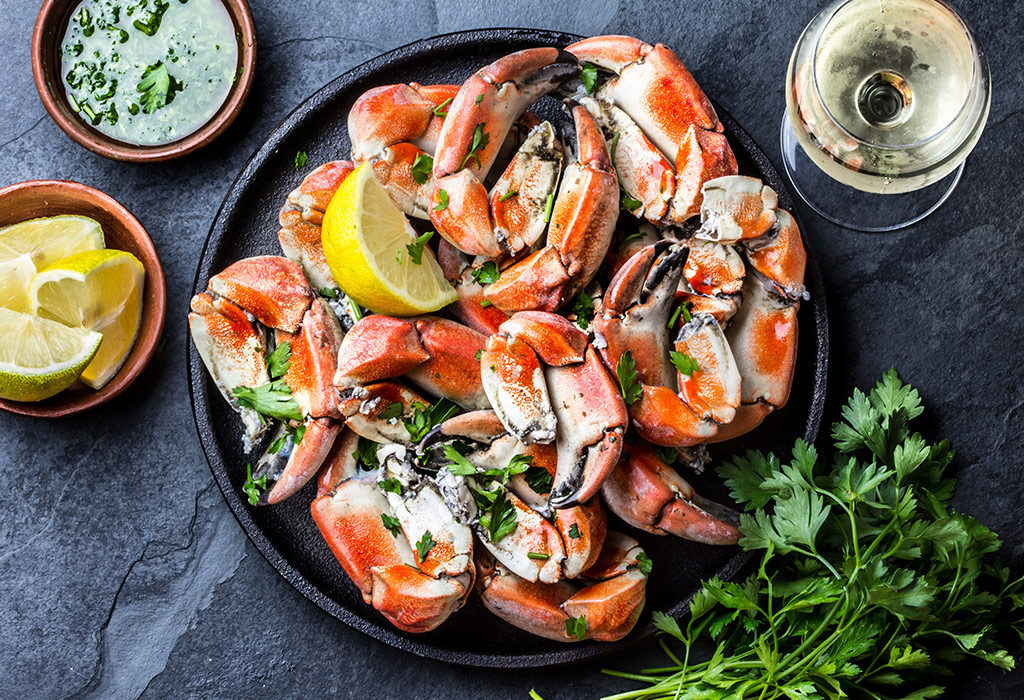 Most seafood like shellfish, oysters, sashimi, sushi, and prawns may be polluted with listeria that can result in pregnancy problems like preterm labour or miscarriage. It’s advisable to consume only well-cooked seafood. If you’re dining in a Japanese restaurant, be cautious as the seafood may be raw on the inside. 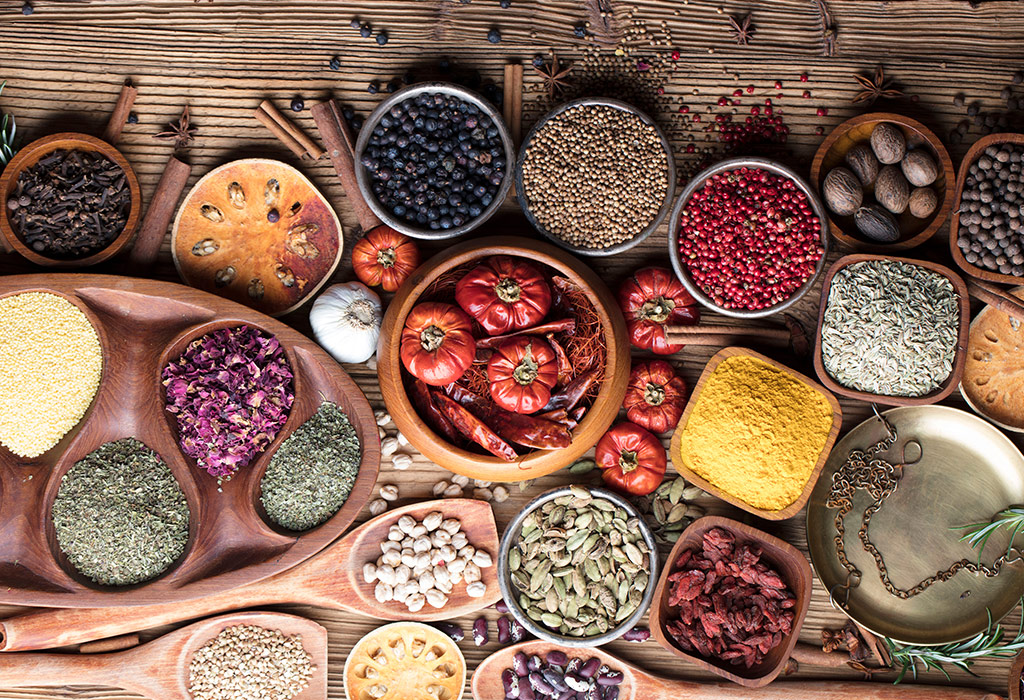 Spices add flavour to dishes. But certain spices like fenugreek, asafoetida, garlic, angelica, and peppermint are best avoided during pregnancy. These spices can stimulate the uterus, and result in contractions, preterm labour and miscarriage. They may also cause blood thinning and bleeding during pregnancy. 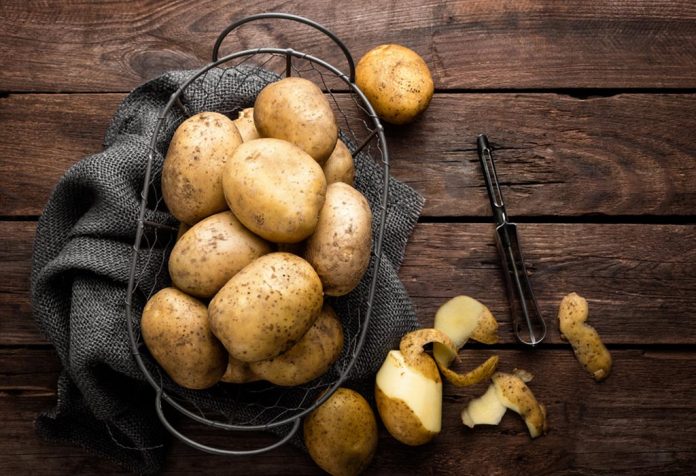 When potatoes remain unused for too long, they develop little green sprouts. Using such potatoes is harmful to expecting women. Sprouted potatoes contain solanine that can hamper foetal growth. 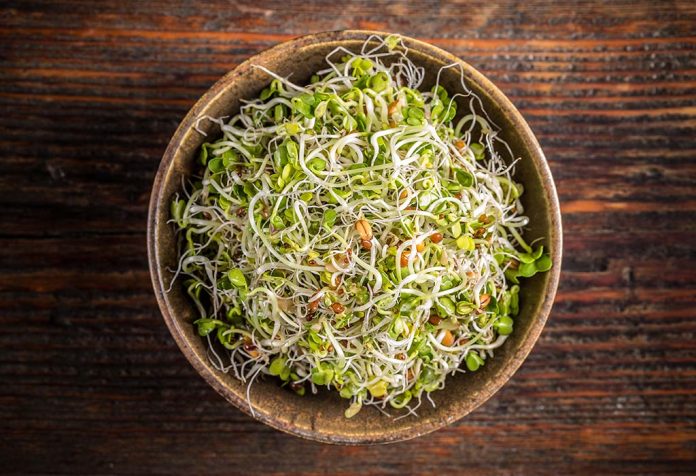 Sprouts are a favourite with many in India. But raw sprouts like clover, alfalfa, radish and mung bean sprouts carry salmonella. That said, cooked sprouts can be safely consumed by pregnant women. 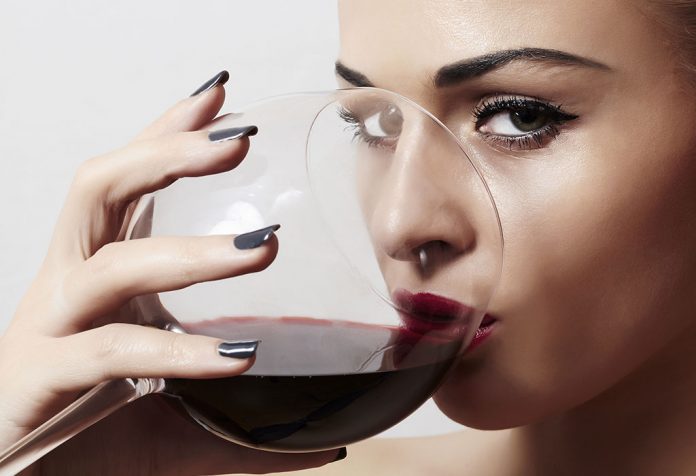 Women who drink alcohol may have to give it up once they get pregnant. Alcohol negatively impacts the brain development of the foetus; at the same time, it increases the chances of miscarriage and stillbirth. Even a small amount may result in a baby born with facial deformities, heart defects and intellectual disabilities. 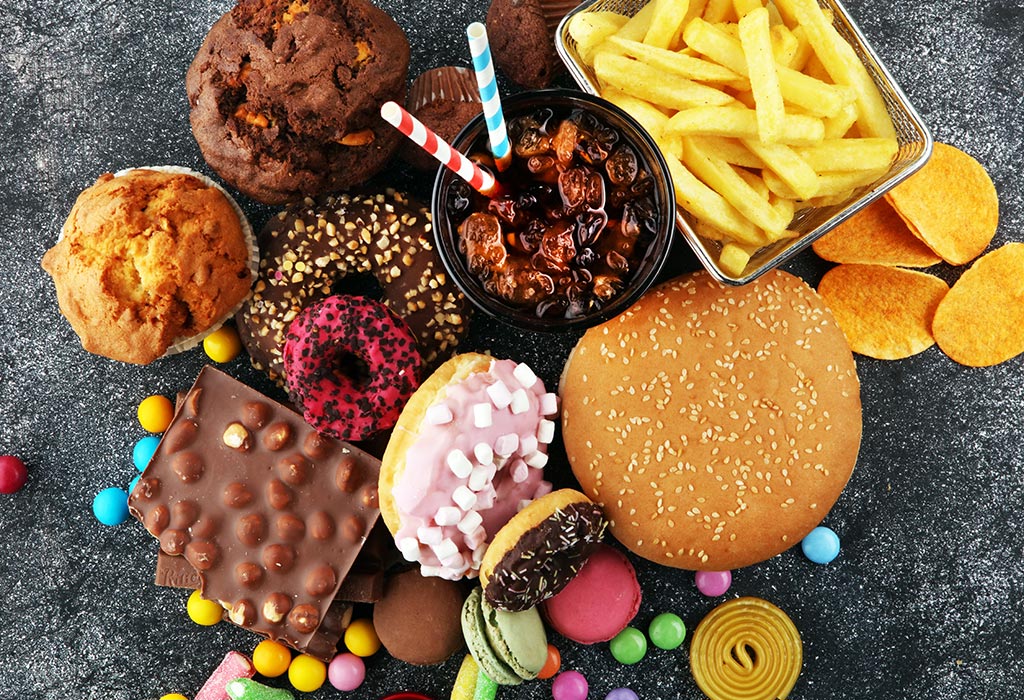 Junk food doesn’t provide any nutrients, rather high calories, fats and sugars. Consuming too much sugar during pregnancy has been linked to gestational diabetes, weight gain and heart ailments. It can also increase the chances of an overweight baby.

Maintaining a healthy and balanced diet is essential during pregnancy. This implies including food items from all food groups so that you can derive the necessary vitamins and nutrients. Moderation is key. Anything eaten in excess can be harmful to pregnancy. We suggest that you consult your gynaecologist and nutritionist in this regard.