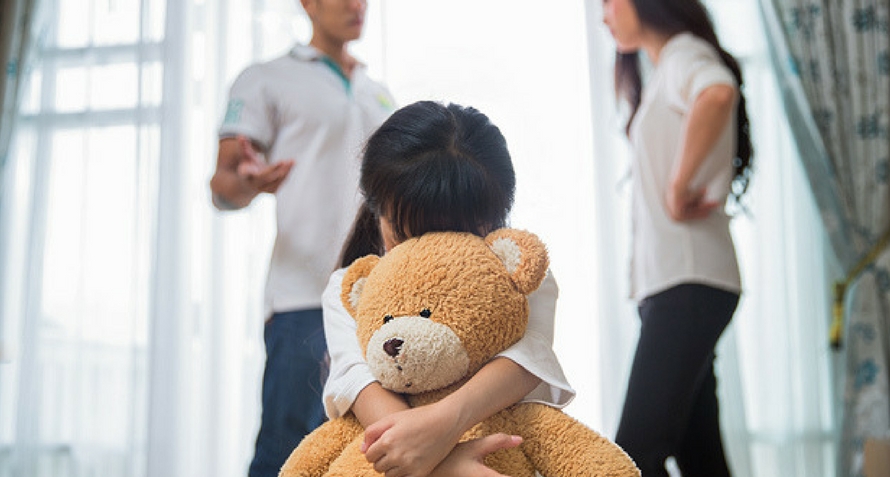 Parental arguing is inevitable. But baring it all in front of your children can adversely affect the emotional and mental well being of your child. In fact, in the long run, it is even tantamount to child abuse in certain countries!

Partners are bound to have disagreements. As responsible parents, however, you should understand the devastating effects of continuous fights in front of your child. It not only interrupts his joyous childhood but can also leave him with some permanent emotional scars. Therefore, consider the following effects of parental fighting on children every time you feel you are going to blow up. Here’s why you need to stop fighting in front of kids – right now!

A lot of parents think that because children do not have a perspective on adult life and problems, they will not understand that dialogue is actually a fight or an argument. However, children are smarter than we adults realise. Just the way a small baby who still cannot utter a word knows when mom is angry and when mom is happy or proud, children learn a lot from the tone, volume, pitch, and facial expressions of two adults engaged in an argument or fight.

Here are some of the negative effects of parents fighting in front of children.

A home is a child’s haven of love and care. Parents fighting in front of kids results in chaos and tension, leaving the child frightened, anxious and helpless. This feeling of insecurity can last a lifetime.

Children often believe that they are the reason for their parents’ fighting and end up feeling guilty. This can be emotionally distressing for them.

Insecurity and feelings of guilt and shame can make your little one feel unwanted and unworthy. This, in turn, results in low self-esteem which can be permanent and damaging in his long-term personal and professional relationships.
As explained in this study, children who constantly see their parents fighting have difficulty processing the contradictions they witness: their parents fight but sleep in the same room at night, they do not fight, but do not agree on things either (passive-aggressive fights), etc. When left unaddressed, children internalise such conflict, and often blame themselves for the situation, resulting in low self-esteem.

Children generally want to please both parents, and the pressure to take sides in a conflict can be distressing for them. They might not understand the basis of the conflict and take a side which might blow up the conflict to even bigger proportions.

It is important to note here that – a lot of times this pressure to take sides comes from the parents themselves, which is rather unfortunate. Children should never ever be made the point of an argument, nor should they ever be pulled into an argument and made to take sides.

For children, we parents are our child’s first, biggest and most influential role models. Children are like mops – they soak up everything they see us saying or doing. As role models, if we use unhealthy communication in front of children, they are going to grow up to be lousy communicators themselves. This will not only affect their personal relationships but also those with their peers and later with their colleagues.

The mind of a child witnessing chronic parental fights is always preoccupied with the fights and arguments. This makes it difficult for him to concentrate on tasks at hand, adversely affecting academic performance. Such an overworked mind can also pave the way to physical ailments and chronic illnesses. A review conducted by UCLA of close to 50 research papers concluded that children who grow up in risky homes are more likely to report physical health problems in adult life, such as vascular disorders, immune disorders, etc.

Fighting and arguments take a mental toll on our minds and leave us feeling drained. This effect is more pronounced in children, as their minds do not have strong coping mechanisms in place. Children who grow up in volatile environments are known to develop behavioural issues: such children either become volatile and tend to behave recklessly (getting into fights at school, becoming rowdy, etc.), or may withdraw and become extremely introverted, avoiding even normal social contact.

In a more severe case, they may develop mental disorders like attention deficit hyperactivity disorder (ADHD), depression, obsessive-compulsive disorder (OCD). Furthermore, children from unstable homes have also been seen to be more prone to substance abuse as they grow up.

At the root of this tendency to develop mental disorders is the fact that conflict actually affects brain development in children. According to a study conducted by Alice Schermerhorn, children growing up in disruptive households tend to develop a higher degree of vigilance: they are constantly assessing their surroundings, and trying to prepare themselves for potentially stressful situations. This state of constant alertness takes a toll on the way these children react to and process different emotions.

The normalisation of wrong deeds like verbal, physical or emotional abuse is another serious, oft-neglected consequence especially of parents physically fighting in front of the child. A child growing up in a household where parents are always calling each other names, or where one adult always gets his or her way around things might think it is acceptable to do such things all the time. While family members may be more accepting (and at times more indulgent) of this kind of attitude or behaviour, such children have a tough time when they step into the real world.

9. Impacts Other Relationships Too

The behavioural patterns, attitudes and approaches to life that children from disruptive households pick up, become a part of their personality and affect all other relationships they have – not just their relationship with their parents. So essentially, fighting parents may affect friendships, romantic relationship, work-equations, and general social skills at large.

It is not that we parents don’t realise fighting in front of kids is bad, and many of us try to make amends in whatever ways we can think of. However, the effect of these fights is like leaving footprints in clay – there is no undoing once the deed is done. Children who grow up watching their parents fight all the time tend to develop personality traits like bullying, escapism, compulsive behaviour, inflexibility, and can be very difficult to get along with. This affects not only their personal but also their professional and social lives.

While physical and sexual abuse get their due attention when they affect any relationship – between two adults, or between an adult and a child – emotional abuse often goes neglected, especially in the Indian culture. Older generations may argue that they were more tolerant and could take a joke or a sarcastic comment in their stride and that parents these days are ‘too lenient’ that are too afraid of their children to show them some tough love.

However, tough love and ceaseless negative or sarcastic talk under the garb of ‘humour’ are two very different things. While the former is necessary from time to time, the latter is a form of psychological maltreatment (along with acts of bullying, threatening, severe insults, isolation, etc.) that leaves a deeper impact than we are ready to accept.

So how is all this connected to parents fighting in front of their kids? Same as always – children see, children do.

Not only is your fight emotionally draining for your child, but it is also teaching him all the wrong things. And when you make him a passive or an active part of the fight, it is nothing less than emotional abuse.

How to Prevent Kids From Getting Affected by the Conflicts

In the words of E. Mark Cummings, psychologist and author of the book Marital Conflict and Children: An Emotional Security Perspective, “Conflict is a normal part of the everyday experience. It’s how the conflict is expressed and resolved, and especially how it makes children feel that has important consequences for children.” It has in fact been confirmed by multiple studies that non-verbal arguments, cold-wars, passive-aggressive fights and ‘stonewalling’ can at times be worse than an actual fight.

So by all means, have that argument! But, do keep the following three things in mind.

1. Try and avoid having these talks when your child is present in the house. If you must, get into a different room and keep your voices down. Best to wait till your child falls asleep, and while you’re waiting, ensure you keep the conversation normal. Don’t start the cold war right there and then.

2. If your child does witness your fight, also ensure they witness the making-up after the fight! Apologise to each other, and hug it out in front of them. While not fighting is ideal, this demonstration will drive home 3 important points-

3. Finally, if things are going so bad between the two of you that you are considering a separation, do not underestimate the power of counselling. You may be hell-bent on leaving each other, and not continuing the relationship, and that’s okay. Agreeing to go into counselling is not always only about patching up and making things work. While that is the ideal scenario (especially when children are involved), counselling can also benefit you in other ways –

How do you and your partner resolve conflicts and disputes without creating a scene in front of your tot? Do share your tips! We would love to hear from you.