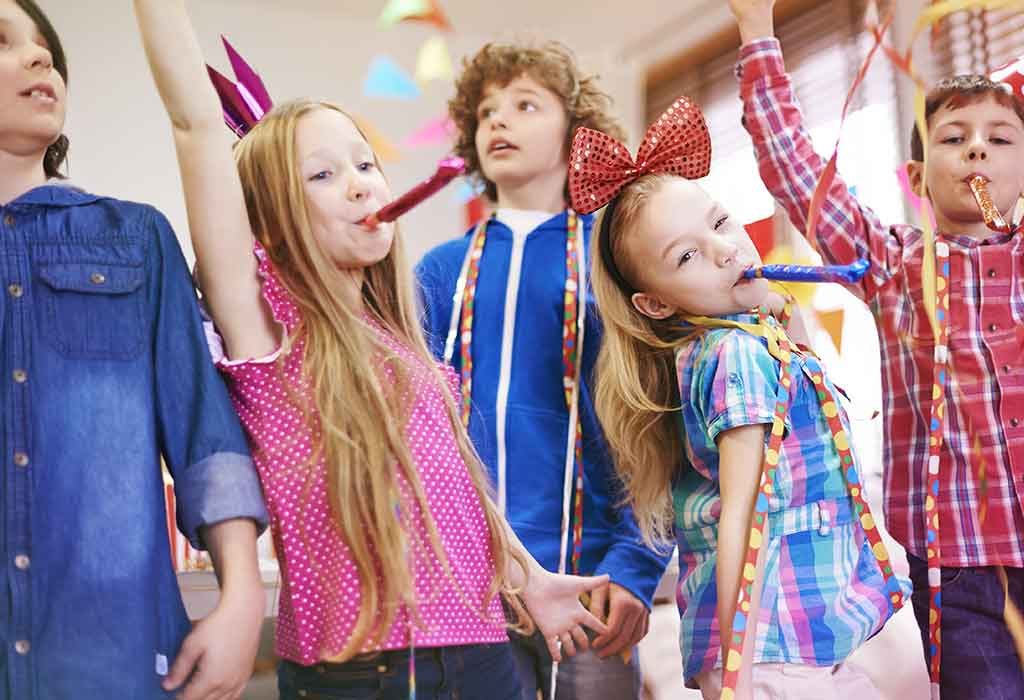 So, you and your kids are looking forward to the party you’ve been planning for weeks. You have the cake ready, the décor is up, and the food and desserts are all set for serving. What is missing then? Music! Your kids love music, and you love to groove with them. But, you don’t quite enjoy grooving to nursery rhymes and want some real feel-good music that will just resonate in the air and cast that spell to have the young and the old shedding their inhibitions.

However, the music needs to be age-appropriate. You want to be the perfect DJ with the right mix of songs that feature compelling dance beats and are free from any kind of profanity or compromising lyrics. The hardest part of choosing songs for a kid’s party is to make sure the lyrics are sane and at the same time, foot-tapping. If you have adults accompanying kids to the party, you want songs that will give them an opportunity to shake a leg, too. There’s a lot to think about.

Here’s is a list of top party songs for kids that can set the mood for a frolicking dance floor and become an instant hit at your kids’ party!

One of the best kids dance party songs was actually written by Pharell Williams for the character Gru from Despicable Me. Pharell Williams was asked to write a song for this grumpy and unhappy character who eventually falls in love and becomes more cheerful in the sequel. A positive song with a feel-good vibe, it sets the mood for some fun.

This one is apt for kids to dance to at a party. Justin put it together with pop masters Shellback and Max Martin, and it featured in the movie Trolls. One has to hear it just once to recognise what a classic it is!

3. ‘Try Everything’ By Shakira

One of the best party songs for 5-year-olds, this song featured in the Disney classic, Zootopia, as a song recorded by a singer named Gazelle (voice-over by Shakira). Judy Hopps plays it on the train on her MP3 player on the train to Zootopia. The song was released in February 2016 and features in the end credits of the film.

This song has some pulsating beats and features throughout the movie franchise, Madagascar. Some have the lyrics changed or altered to suit the plot of the film and the subject of the film. The song is also included in the stage adaptation of the movie where it is sung again by King Julien. It is one of the best preschool dance party songs to include in the playlist.

Originally a song composed by Neil Diamond for “The Monkees”, it was adapted by the retro band Smash Mouth as part of the soundtrack for the movie “Shrek”. With its peppy beats, this song about love will have the kids and adults grooving and dancing instantly.

Sung by Dwayne Johnson, who is also known as The Rock, the song appears in the film Moana. It is picturised on Maui the demi-god who pushes Moana the central character to face the truth and introduces her to a load of things. In fact, it’s a song about being thankful.

7. ‘Something That I Want’ By Grace Potter

This song was written and composed by Grace Potter for the movie Tangled. It’s the song that brings the film to a rousing finale. With a groovy tune and some foot-tapping beats, the song will have everyone dancing and hands clapping to the rhythm.

An upbeat number, this song is a favourite among children. It represents unprecedented joy and unadulterated mirth with a few keyboard chords. It featured in the 2015 biopic film Eddie the Eagle. It will have kids literally jumping to the beat and give everyone an adrenaline rush.

Written by an Australian singer and lyric writer, Sia, the song was also remixed by Jamaican singer Sean Paul. A party anthem, it is joyful and will have everyone showing their best moves. This one is a perfect choice for those kids who love choreographing and also show their dancing skills.

Sung by Bruno Mars, the song is boogie, funk-pop and a disco soundtrack. Performed in a rapping style, it has a lot of charisma and fun. It featured in Zootopia and an episode of Child Star in the sixth season of Glee.

A dance party with your kids could just make your life a lot better and cheer you up for a long time. This list of party songs is perfect for kids’ parties. Listen to them before adding them to your playlist. None of them has offensive lyrics, vulgar language, or blatant cursing. Most of them get played on the radio regularly, and it will definitely perk up your mood on a low day.