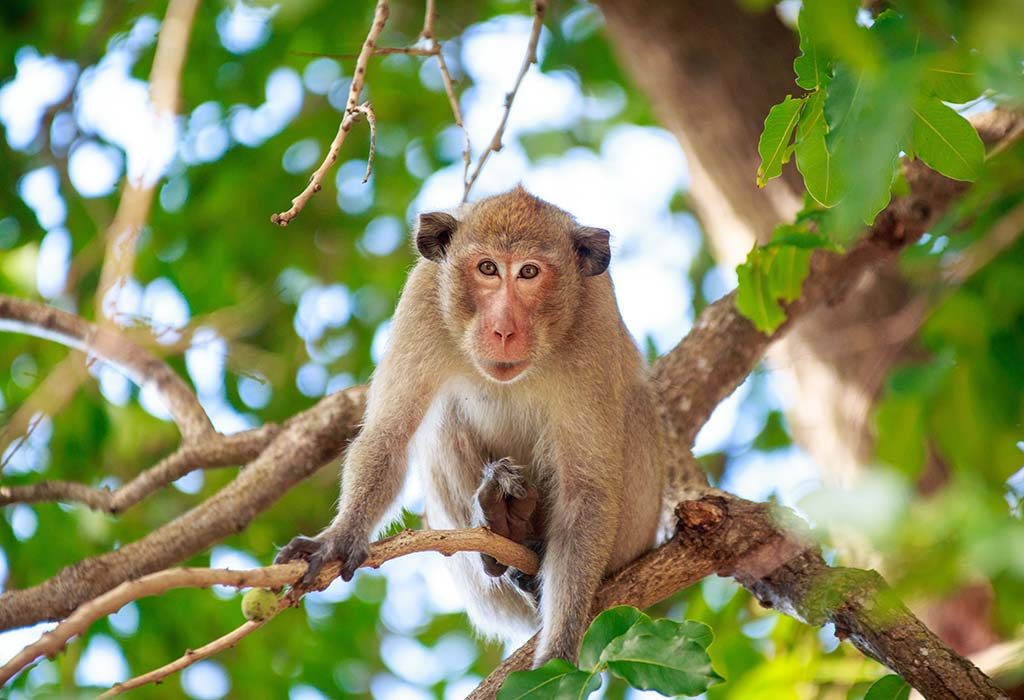 Monkeys are naughty and agile creatures who don’t shy away from humans. They are also super-intelligent creatures that adapt quickly to their environment. If your little one is eager to learn more about this species that are close relatives of humans, there is a lot you can tell him. Read these interesting facts about monkeys and enhance your child’s knowledge.

Facts and Information About Monkeys for Children

Here we have compiled some fun facts about monkeys that you can share with your little one:

Monkeys are primates that are from a sub-group known as haplorrhines or ‘dry-nosed.’ More than 260 known species of monkeys have been discovered until now. Most monkey species are arboreal, meaning they live on treetops as well as on land. They are intelligent and active. The species is separated into old world monkeys (from Africa and Asia) and new world monkeys (from Central and South America). Lemurs and Galagos are not dry-nosed, but wet-nosed species of monkeys.

Although apes belong to the same subgroup as monkeys, they are not exactly monkeys. This is a common misunderstanding though. Apes are characterised by their ancestry and typical characteristics which are much closer to humans. The structure of the body, as well as their intellect, are very similar to that of humans. They include gorillas, chimpanzees, and gibbons. These species have strong social groups and language capabilities.

Most monkeys have tails. The prehensile tail is very important to swing from tree to tree. It is also used to hold on to food, provide balance and support, and improve control and stability for the animal. The Barbary Macaque is an old-world monkey found in Algeria Morocco, and Gibraltar and has no tail.

4. True Affection and Show of Love

Monkeys have very large social groups. They communicate with each other and have very strong family ties. Monkeys who make peace with each other will groom each other very affectionately. When a monkey meets another monkey who have has interacted with before, they recall old interactions. Sometimes monkeys who dislike each other have been known to display aggressive rage that can even be fatal. Scientists have noticed that monkeys never forget anyone who helped them. If you want a monkey on your side in a fight, you need to build an affectionate and strong friendship with it. Grooming is the best way to bond and show love among monkeys.

The pygmy-Marmoset is a new world monkey found in the Amazon regions. It is the tiniest monkey known to man and weighs approximately 100 grams only. It feeds on the sap and gum from trees and is also called a gummivore. Their groups number anywhere between 2-9 individuals. They communicate through visual or chemical signals.

The Capuchin Monkey is another small monkey species that has become popular through TV shows and movie appearances. Found in South and Central America, they have black, brown, or buff pelage. They have tails that are nearly as long as their bodies and can go up to 50cm. They mainly diet on dry leaves, molluscs, seed sugar cane, shellfish, and even frogs.

The Mandrill is a beautiful and huge communicatemonkey. It has a characteristic olive green and grey pelage. They also have white and yellow banded underbellies. The muzzle is unique with a red stripe running through its length with tufts of white hair forming a beard. It also has red lips and nostrils. Their chest glands are for olfactory communications and males have larger canines than females. The male Mandrill is known to grow anywhere between 19 and 37 kilograms while females are usually half that weight. Male Mandrills also flaunt bright red behinds that attract females and are supposed to be a sign of virility and fitness.

This cool monkey gets its name from having long hands and legs, making it look like a spider. These monkeys are new world monkeys of which spider monkey facts state that two species, in particular, are endangered. The black-headed spider monkey inhabits Ecuador and is around 8-9 kgs in weight. They are excellent climbers with an extraordinary grip. Groups can number even 100 individuals. They can take very long leaps of about 9 meters. Their communication consists of high-frequency whining. The brown-headed spider monkey is also critically endangered.

This is a typically long-nosed monkey which is native to Asia and endemic to Borneo islands. They are characterised by a brownish-red nose colour which is long. The species stands out because of this peculiarly long nose that makes it look very odd and weirdly funny. Males can be 66cm to 76cms in length while females can measure just 3cm to 62cms. The nose too differs in length with the male nose measuring 10.2cm or longer. The species have brick red, orange, or yellow fur on their back and they have webbed toes. Both male and female of the species have pot-belly like bulging stomachs.

The squirrel monkey is a tiny little fellow that is found in wetlands and marshes of central and South America. Due to their dwindling habitat, they are often seen invading plantations in search of food. They usually have grey bodies with a white face. They have long tails that provide balance.

10. Smart Monkey of The World

There are seven monkeys in Connecticut that have grasped the concept of money. They were taught that money could buy them apples and it took them a mere few months to understand this idea. They even understood that one token could get them a single apple versus 2 Jellos and so they would keep opting for Jellos.

In another experiment, a monkey named Kanzi learned to cook, light a fire, roast marshmallows, and use other tools to help himself.

Monkeys are interesting and smart, but can sometimes be mean and aggressive if they feel threatened. Tell your kids some of these fun facts but also teach them to respect nature and wildlife from a distance without harming them or causing damage to their habitat.